Week One: Painting with Bacteria! - “Who are you?” activity. 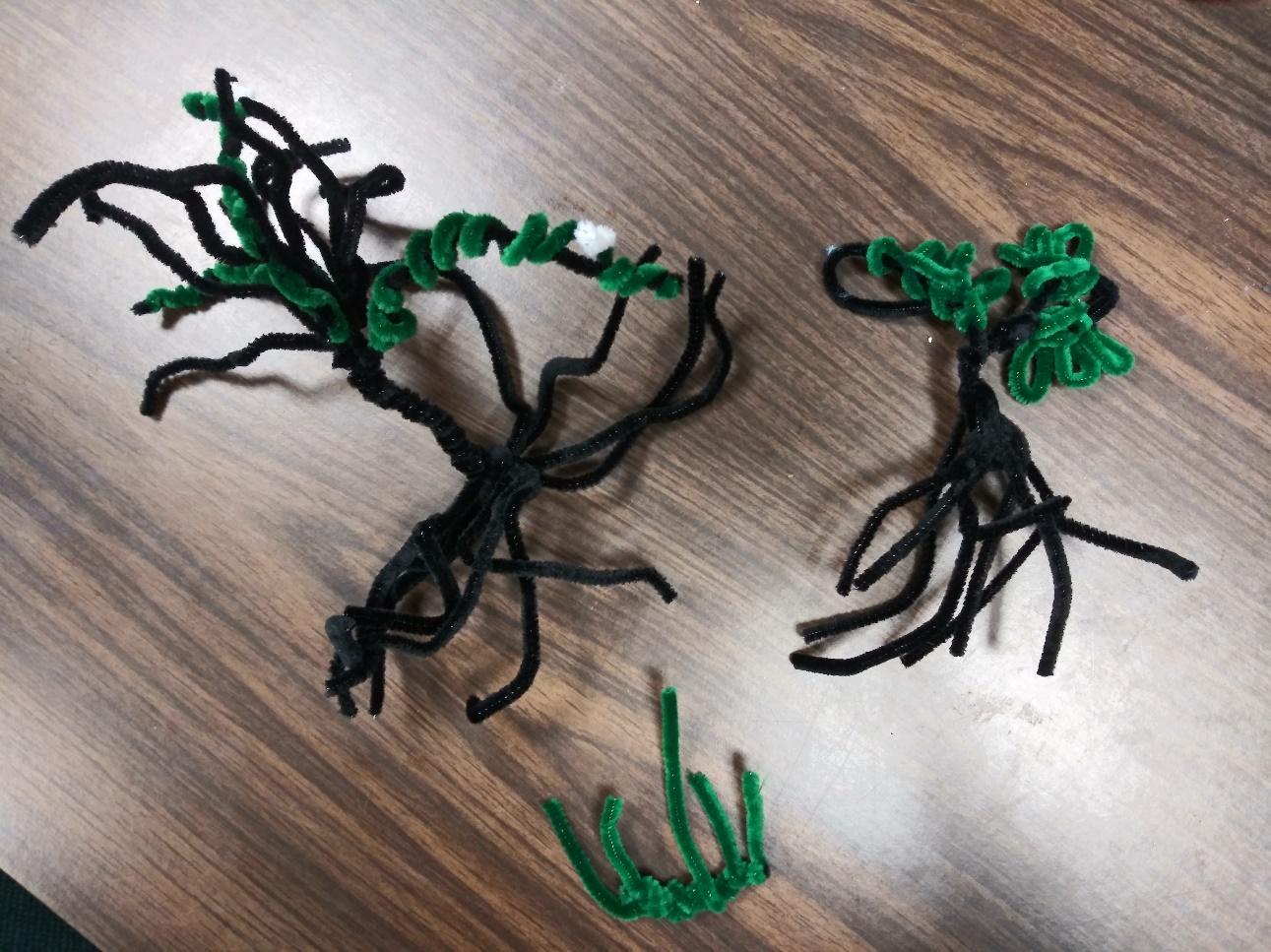 Week Three: Only for the Spineless! - Live crown conch. 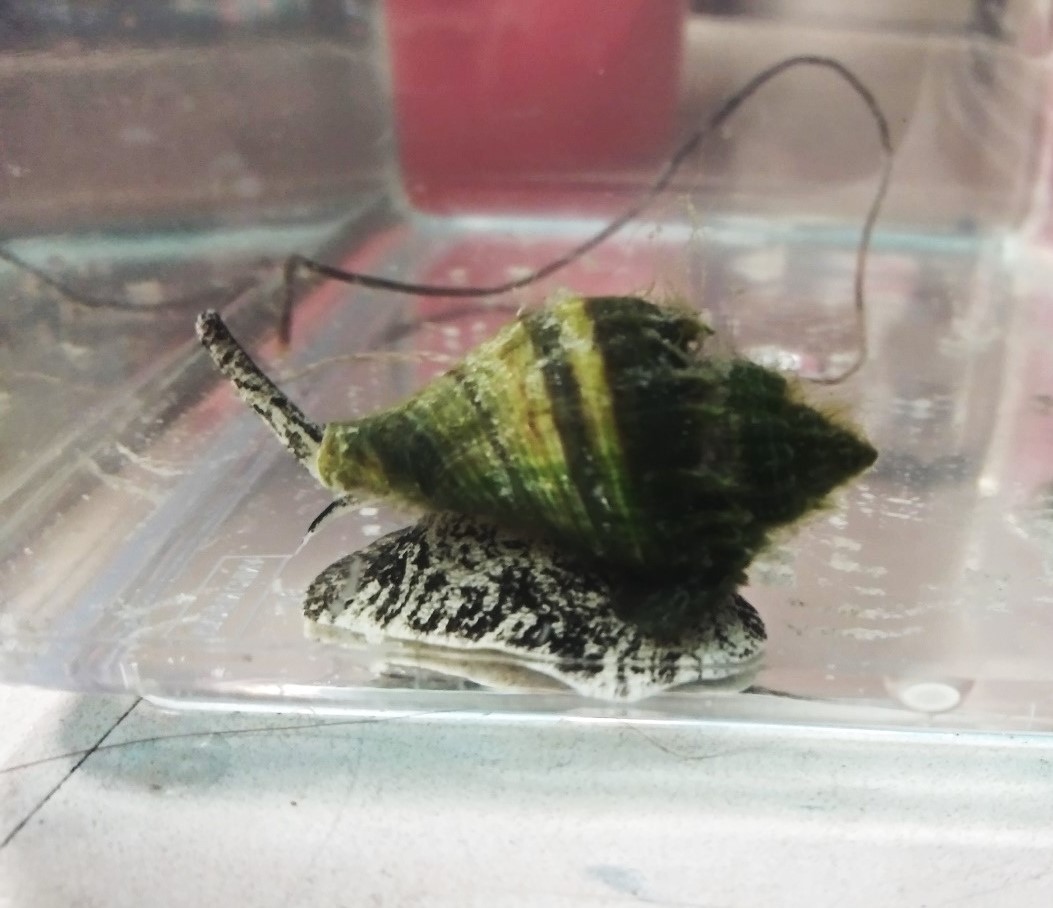 Week Four: Not for the Squeamish! - Graduate student, Brigid Carr, showing the external anatomy of the lionfish. 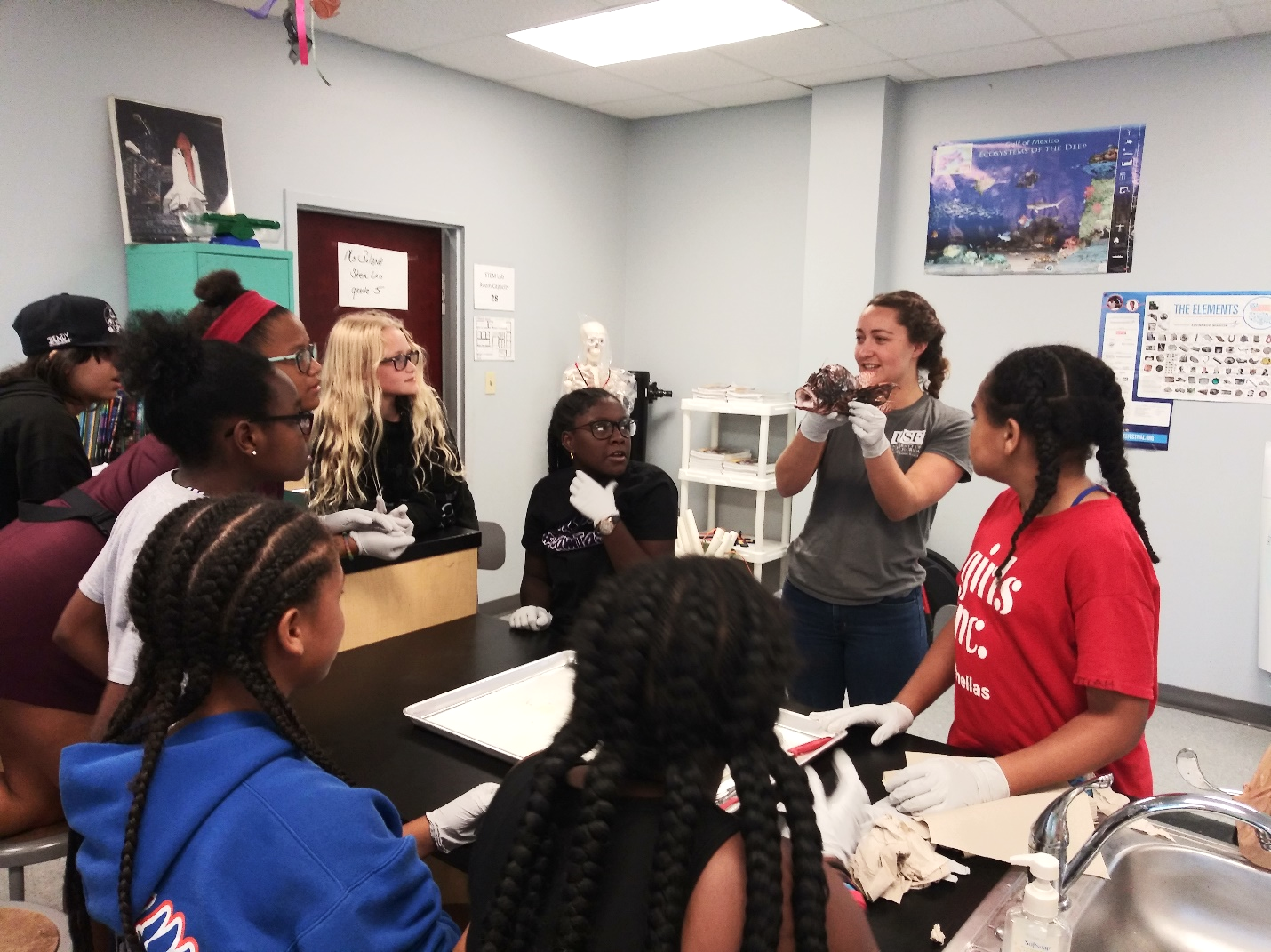 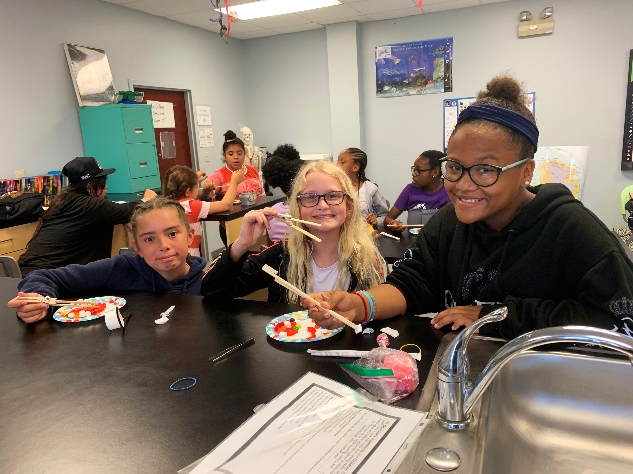 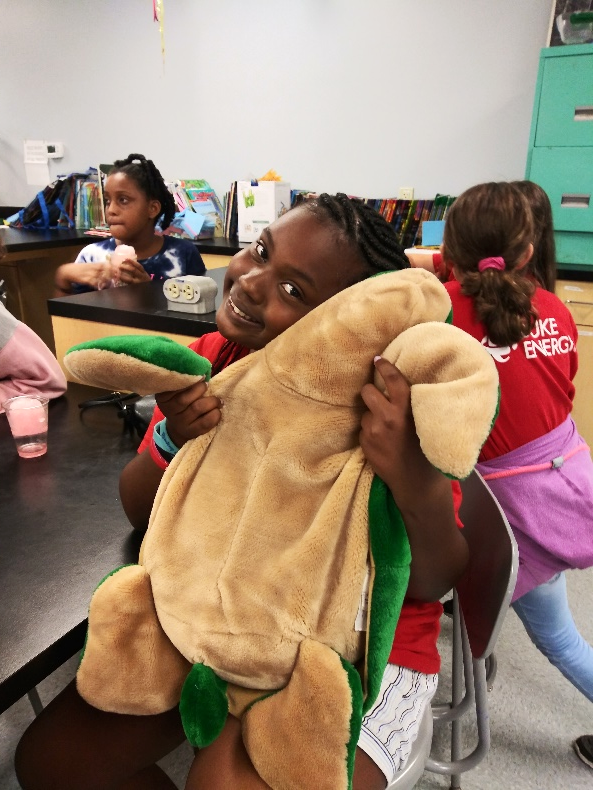 Week Eight: On the Road to the Florida Aquarium - Echolocation game. 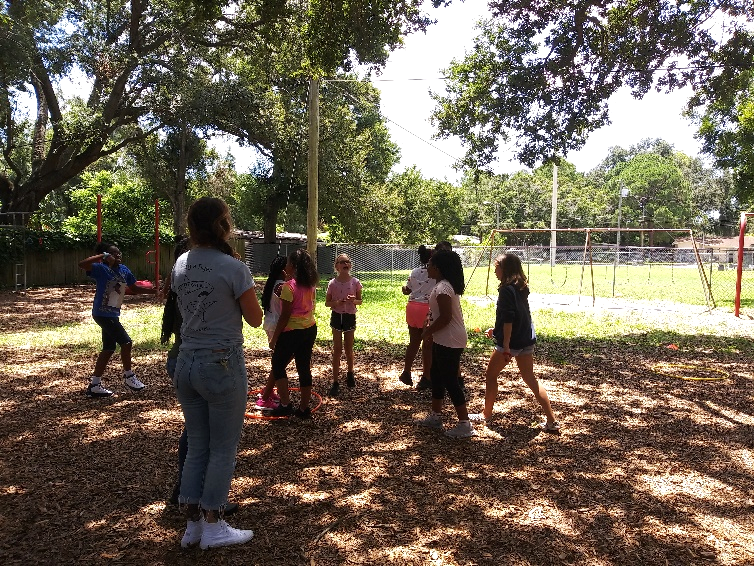 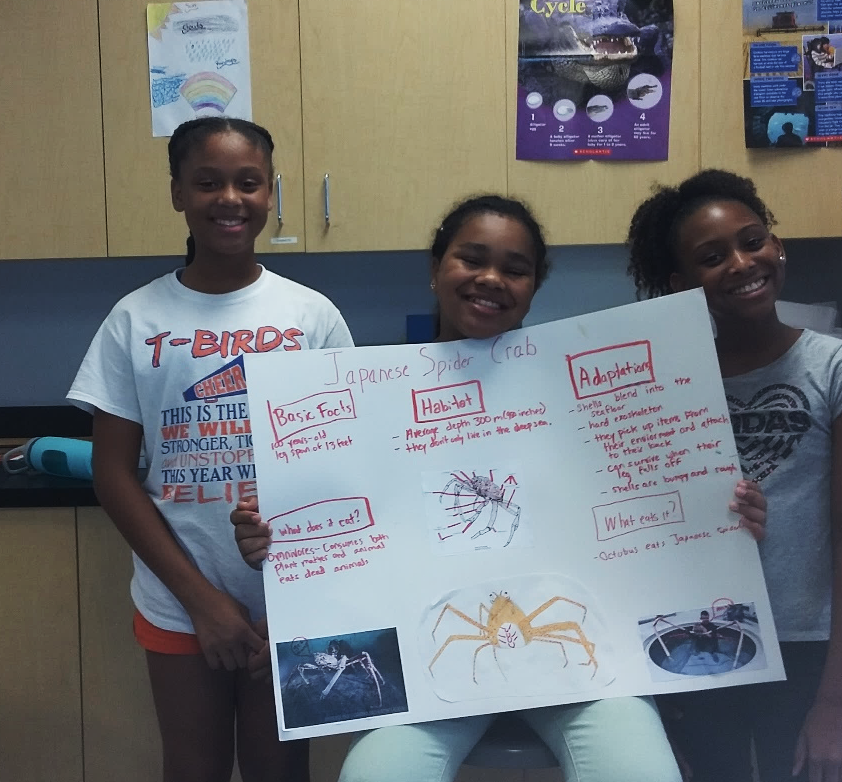 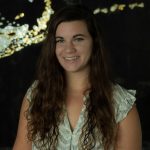 I am the outreach coordinator in Dr. Mya Breitbart’s lab at the USF College of Marine Science. For the past couple of summers we have done outreach activities with Girls Inc. of Pinellas, an organization that inspires middle school-aged girls to be strong, smart, and bold through afterschool programs and summer camps. I decided to continue working with Girls Inc. because I identify with their values and want to help young girls grow and develop a positive self-image. If you’ve been following this blog site you may remember a post I did earlier this summer when we discovered a seaside science surprise! As a reminder, this summer I developed a 10-week science program focusing on living things in Tampa Bay, beginning with the smallest (microbes) and progressing to the largest (mammals). I grew up loving animals and the ocean, and wanted to share that passion with the girls.

Week One: Painting with Bacteria!

To get to know the girls in our first week together, I created a “Who Are You?” paper for them to fill out (see below). Many of the girls did not know what to put for “What do you love about yourself?” I enjoyed helping them fill in the blanks. Next, we covered the goals of this summer of science.

The main goal was to have them feel connected to Tampa Bay and the critters that live here. We started with a lesson with microbes (bacteria and viruses), our lab’s specialty. Microbes are the most abundant organisms on the planet, so we talked about good and bad versions of both bacteria and viruses. I should clarify that I don’t mean the viruses on your computer, since this is an easy misconception for kids.

Interns from my lab helped show the girls bacteria and viruses grown up (cultured) on petri dishes. Their eyes widened when I told them they got to paint with bacteria on their own petri dishes. We gave them petri dishes filled with solid nutrient media, cotton swabs and colorful liquid bacterial culture to paint with. They painted everything from cats to hearts. I also had them swab an area of the room they thought would be “clean” to see which bacteria grew on it after a week. They were surprised by how many bacteria colonies had grown on their plate after swabbing a dirty a sink handle.

During the second week, I talked about primary producers and the girls had the chance to look at live plankton under microscopes. Their job was to identify the differences between the plant-like plankton (phytoplankton) and the animal-like plankton (zooplankton). The girls loved learning that of the last two deep breathes they took, one contained oxygen from land plants and the other had oxygen produced by phytoplankton in the ocean. They had never heard that before!

After they had their fill of looking under the microscopes, we moved on to plants found in Tampa Bay. I showed them the difference between three species of seagrasses using different shapes of noodles and actual pieces of seagrass found in the plankton sample. We also talked about three types of mangroves and how both plants play a big role in keeping our coast healthy. To end the day, the girls made mangroves and seagrasses out of pipe cleaners.

Week Three: Only for the Spineless!

More than 98% of species on Earth are invertebrates that rely on other strategies than a backbone for support. I brought in live, preserved and stuffed animal versions of many invertebrates. The show-and-tell where we passed around the critters to learn about different types of invertebrates was a hit, especially the live crown conchs (snails). We planned to bring in fiddler crabs as well, but that is another story. Their favorite preserved organism was the squid.

Week Four: Not for the Squeamish!

Many people think girls shy away from blood and guts, but not these girls! Before dissecting our specimens, we reviewed the different types of fishes and covered those found in Tampa Bay, including mullet, cownose rays, and bonnethead sharks. Then we reviewed the external parts of a fish, split the girls into two groups, and dissected two lionfish (spines removed). Lionfish are an extremely invasive species found in Florida waters. The girls wanted more and more. One group took out the eye, the other wanted to look at the brain – so much for being squeamish!

Birds come in all shapes and sizes, and this week we focused on their beaks. After reviewing a few examples of birds around Tampa Bay, including cormorants, osprey, pelicans, and what they typically eat, we reviewed the idea of “form follows function,” meaning how the shape of the beak helps them eat their meals. For example, the way a pelican scoops up its prey is different from how an ibis gets its daily dinners. Then the girls pretended to be the birds and try out different beaks (chop sticks, scoopers, tweezers, clothespins) to pick up different prey (gummy worms, Swedish fish, marshmallows, M&Ms) and learn how beaks are specially adapted based on prey type.

Not too long ago, I saw a video of a girl “rescuing” what she thought was a turtle by putting it into the water, but it was a tortoise…so we started this week with discussing the differences between the two. A turtle spends its life in the water, while a tortoise lives on land. Next, I gave them a lesson on sea turtle morphology, the different species, their nesting habits, and how to help protect them. We passed around stuffed animals of sea turtles, a real sea turtle carapace (shell) and a preserved hawksbill that the Florida Fish and Wildlife Conservation Commission loaned me to show the girls. They were surprised that the carapace had a spine connected to the inside.

Then the girls played a sea turtle survival game. They pretended they were baby sea turtles trying to survive the obstacles of the ocean, including predators like fishing boats, sharks, and birds to survive to become adults. It’s not easy being a baby sea turtle!  We then covered ways to help conserve sea turtles, such as reducing plastic bag use, and turning off your lights at night if you live on the beach.

This week we talked about big sharks and marine mammals. My goal was to share how cool and interesting sharks are, not scary and dangerous. We covered, for example, how hammerhead sharks are thought to use their elongated snout as a “metal detector” to find their prey buried in the sand, using their ampullae of Lorenzini (electroreceptors). How cool is that?!

For the mammal portion, I focused on dolphins and manatees. It was exciting to tell the girls that manatees are no longer considered endangered, because of all the hard work focused on their conservation. We played a game outside where the girls could practice their echolocation skills (calling out a word and listening for the same word in response from a partner) to act like dolphins.

Week Eight: On the Road to the Florida Aquarium

This week we went on a field trip to the Florida Aquarium. The girls got to see live versions of most of the organisms we had talked about up to this point. They were overwhelmed with joy and excitement. I was happy to tell them about all the fishes and answer their questions about the animals in the tanks. We even saw live lionfish, the species they had dissected earlier in the summer.

This week we worked in the computer room, where the girls could pick any marine organism and research it with the goal of making a poster. I gave the girls basic guidelines to search, including how long the organism lives, where it lives, what it eats, and its adaptations.

In order to wrap up and assess how much they had learned over the summer, I made two interactive boards for the girls to play with. Each board had different categories with Velcro to attach images (photos taken by Mya Breitbart) that match that animal category (see below). One board was marked “easy”, with categories like plants, mammals, fishes, invertebrates, while the other board was “hard”, with categories like echinoderms, cartilaginous fishes, and arthropods. The girls did a great job working in teams to complete the boards, with little help from us.

After working hard on researching their critters, the girls had the chance to put together their posters in groups or individually. They wrote out their researched descriptions, pasted on photos, and even drew the animals themselves. After they finished their posters, they got up in front of their peers and presented what they learned. It was a nice feeling to get to sit back and hear what they had learned throughout the summer.

Girls Inc allowed me to spread my passion for science by create a lesson program, come in each week and teach these girls about marine organisms. I love making presentations and activities for kids to learn science in a fun and interactive way. It is a challenge for me to translate science into words that kids can easily understand and digest. Making this program helped me get a better understanding of the diversity of organisms in Tampa Bay, fulfilling my love of learning, since I am not a student anymore. I can’t wait until my next outreach adventure.

Special thanks to all the volunteers who came along to help or donated specimens. I couldn’t have done it without you!

Ocean Obs ‘19 Wraps Up in Honolulu

Ocean Obs ‘19 Wraps Up in Honolulu