Chris Moore making adjustments to the automated, flow-through pH sampler out at the mouth of Tampa Bay. 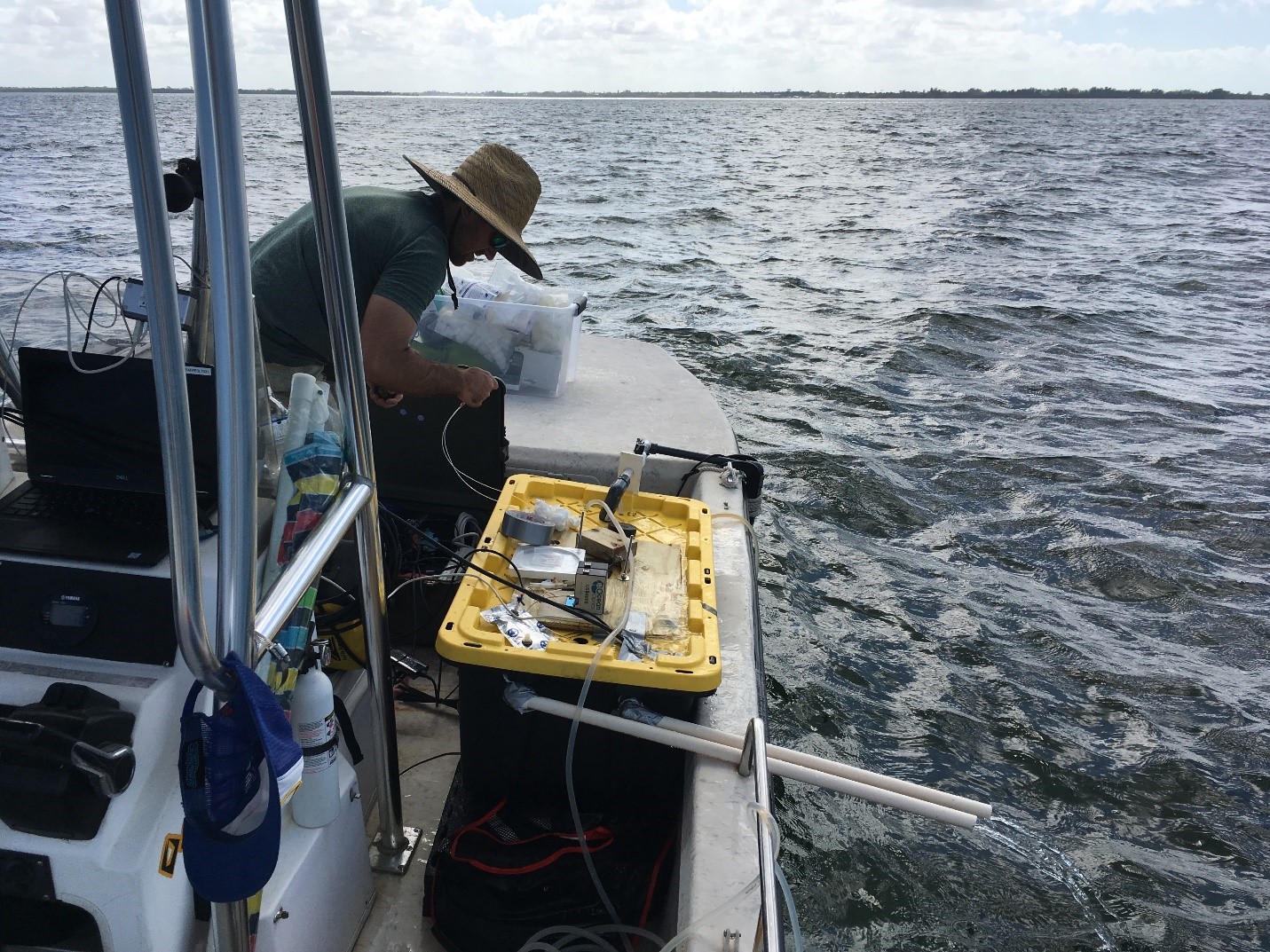 Moore preparing samples for nutrient analysis that will help to explain variability in the carbonate system. 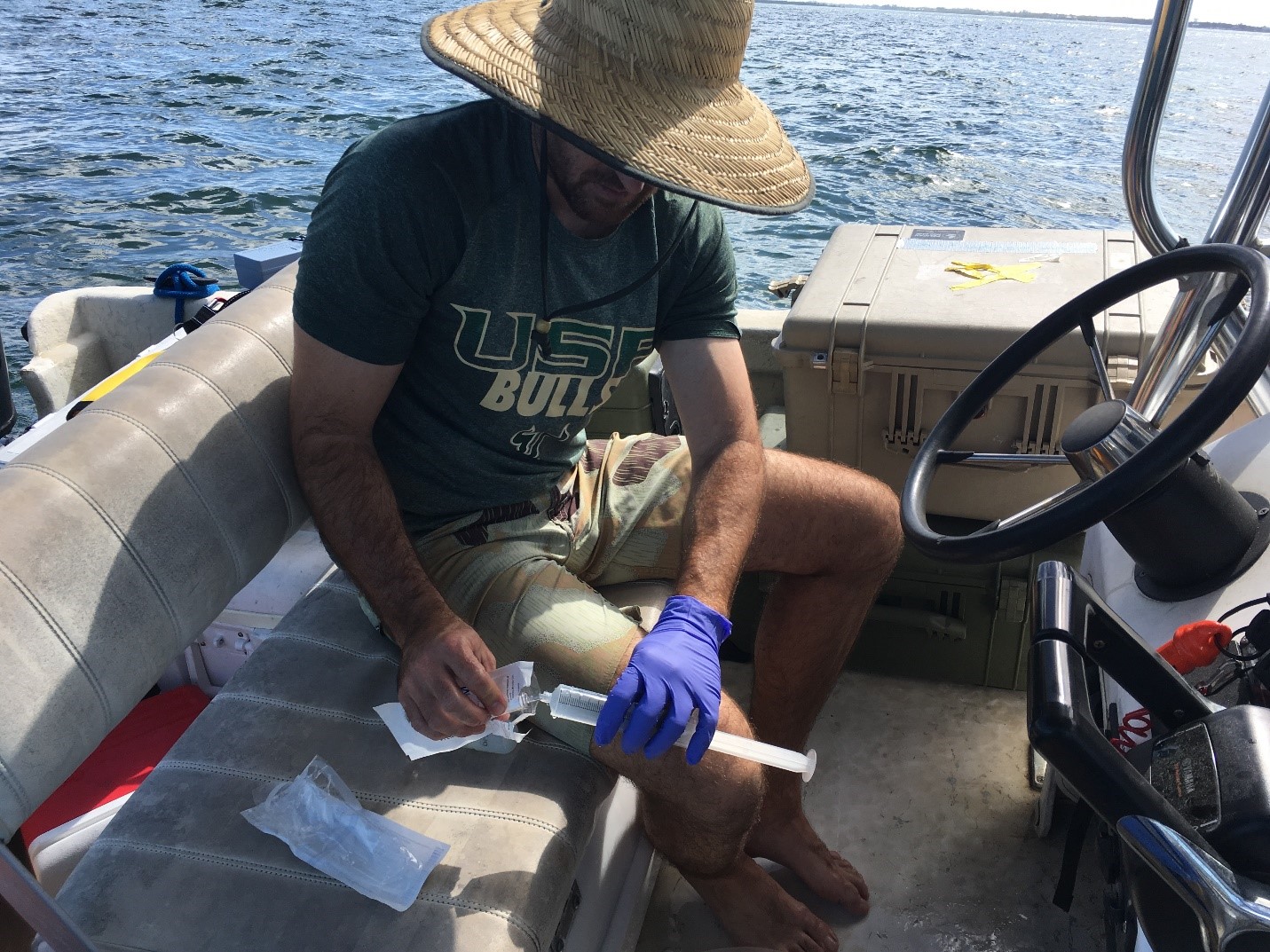 It can get cramped on a small vessel with all the instruments needed to characterize the carbonate system. The last minute additions of a kayak –and beach umbrella! – were much appreciated. 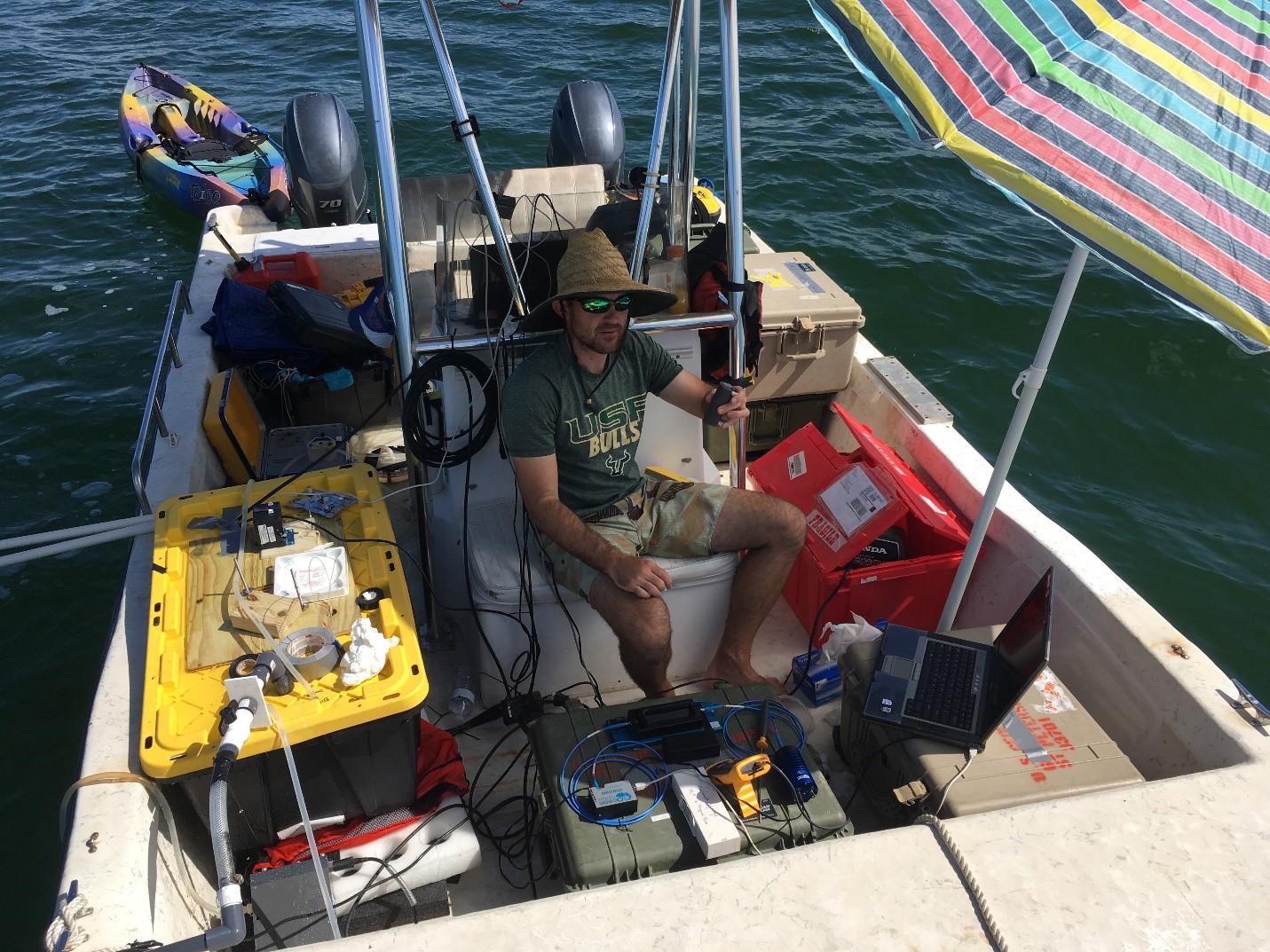 24-hour sampling in full swing upstream on the Manatee River. 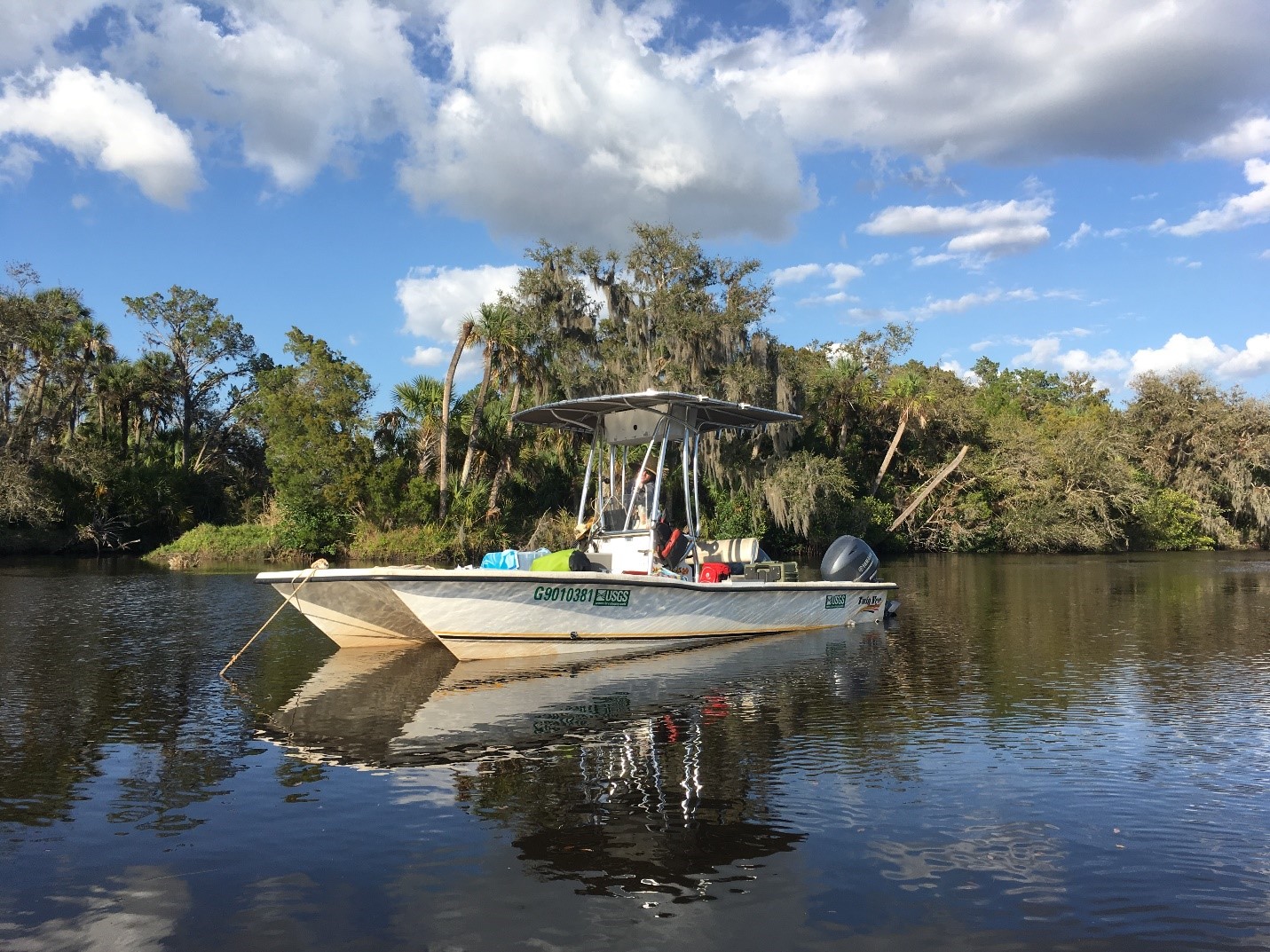 The color of these discrete bottle samples, taken hourly, visually demonstrates the transition from bay to river. 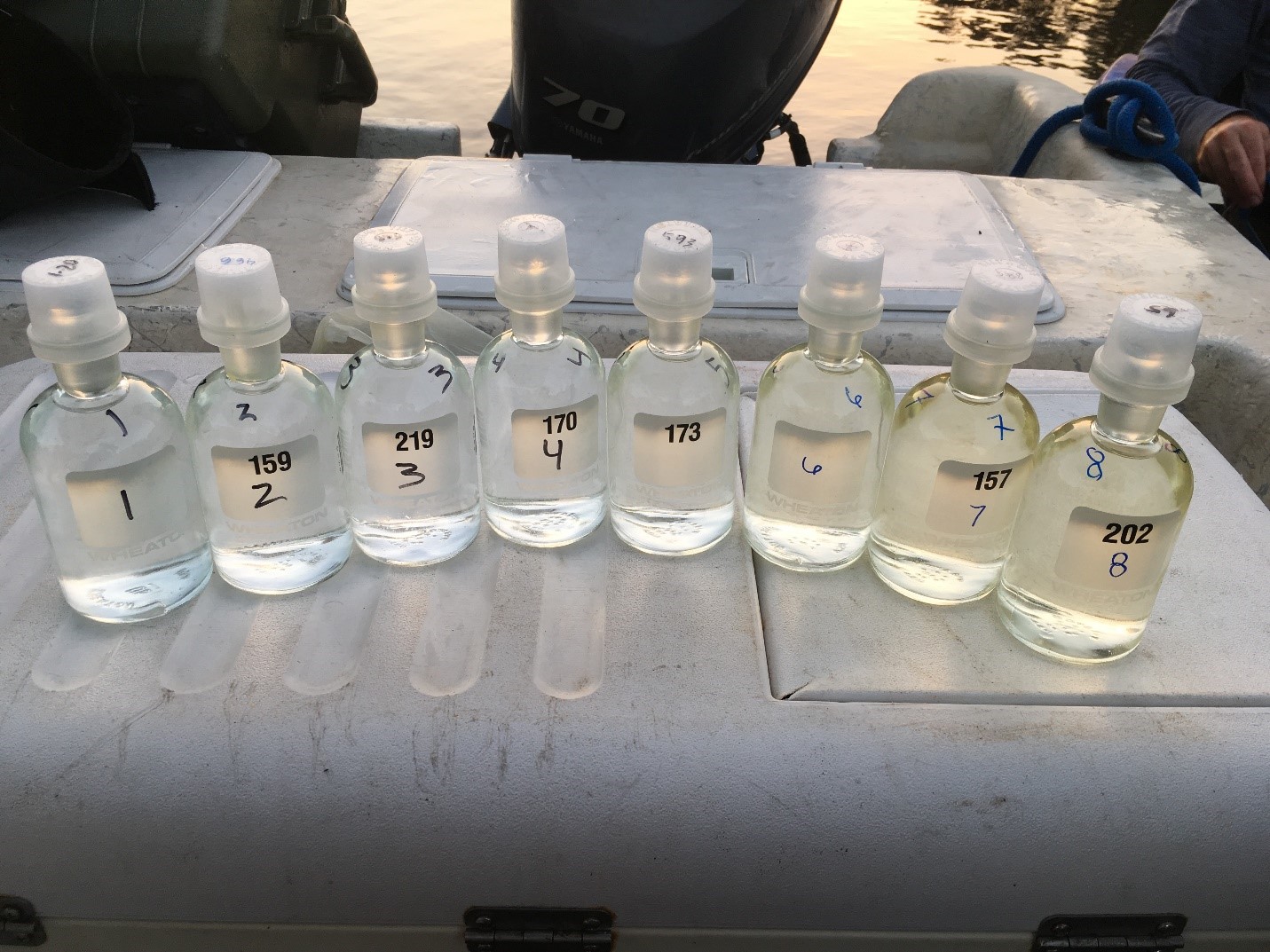 Chris in the middle of all-night water sampling. I awoke to snap this flash photograph…and happily went back to sleep. 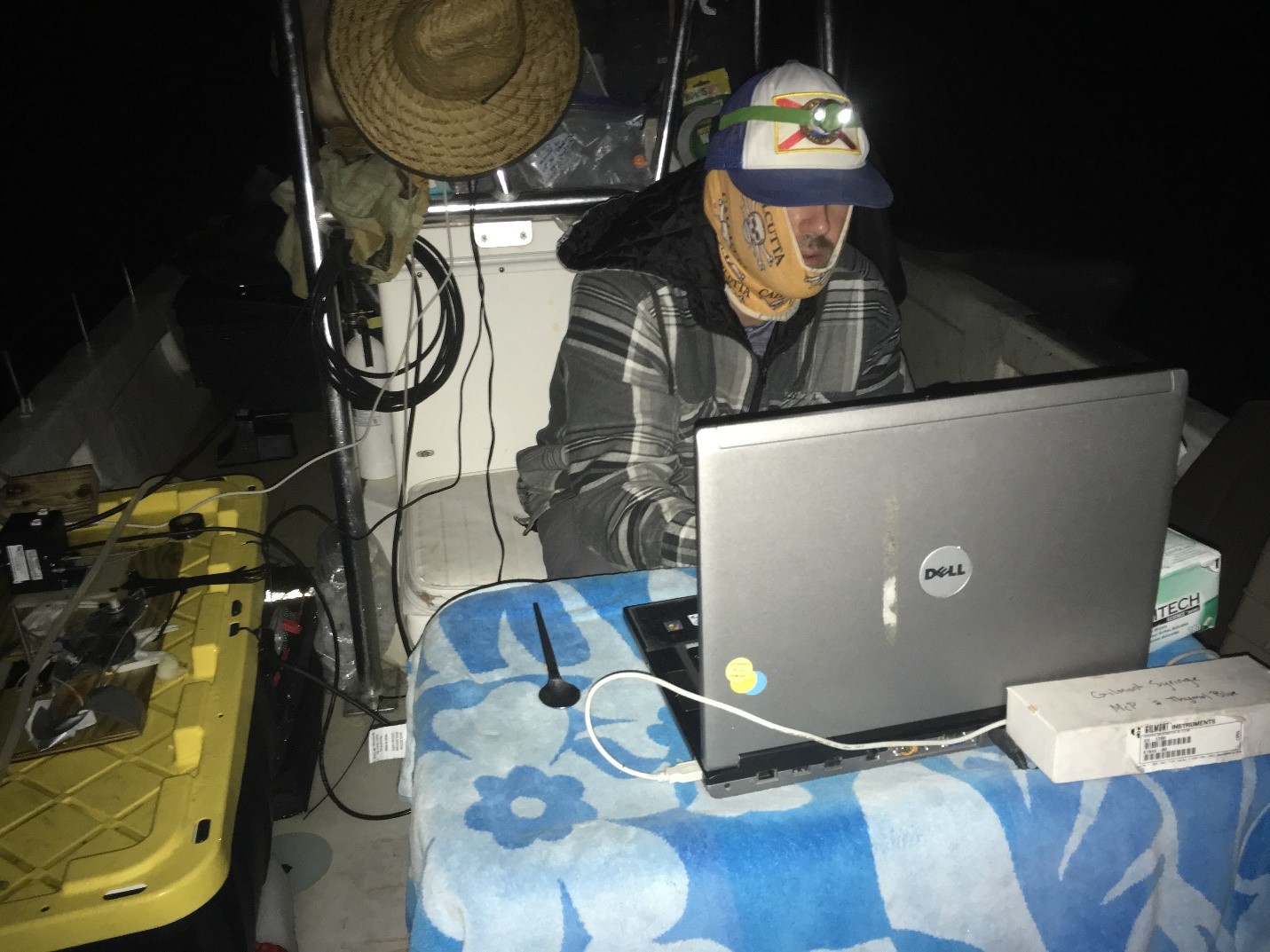 Perks of the job: excellent sunrise on the Manatee River. 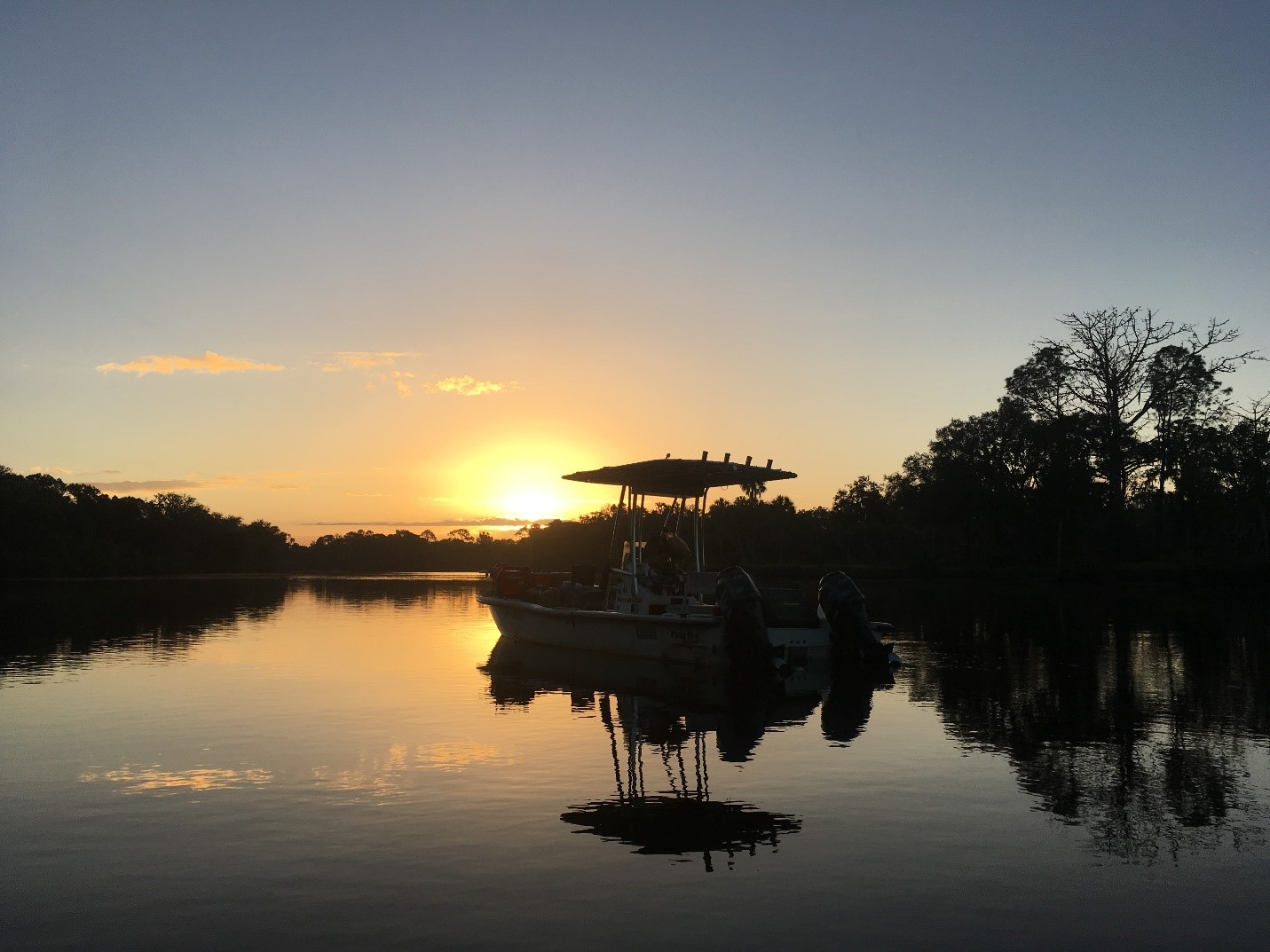 Back to work: Moore preparing for hourly sampling on the second day. 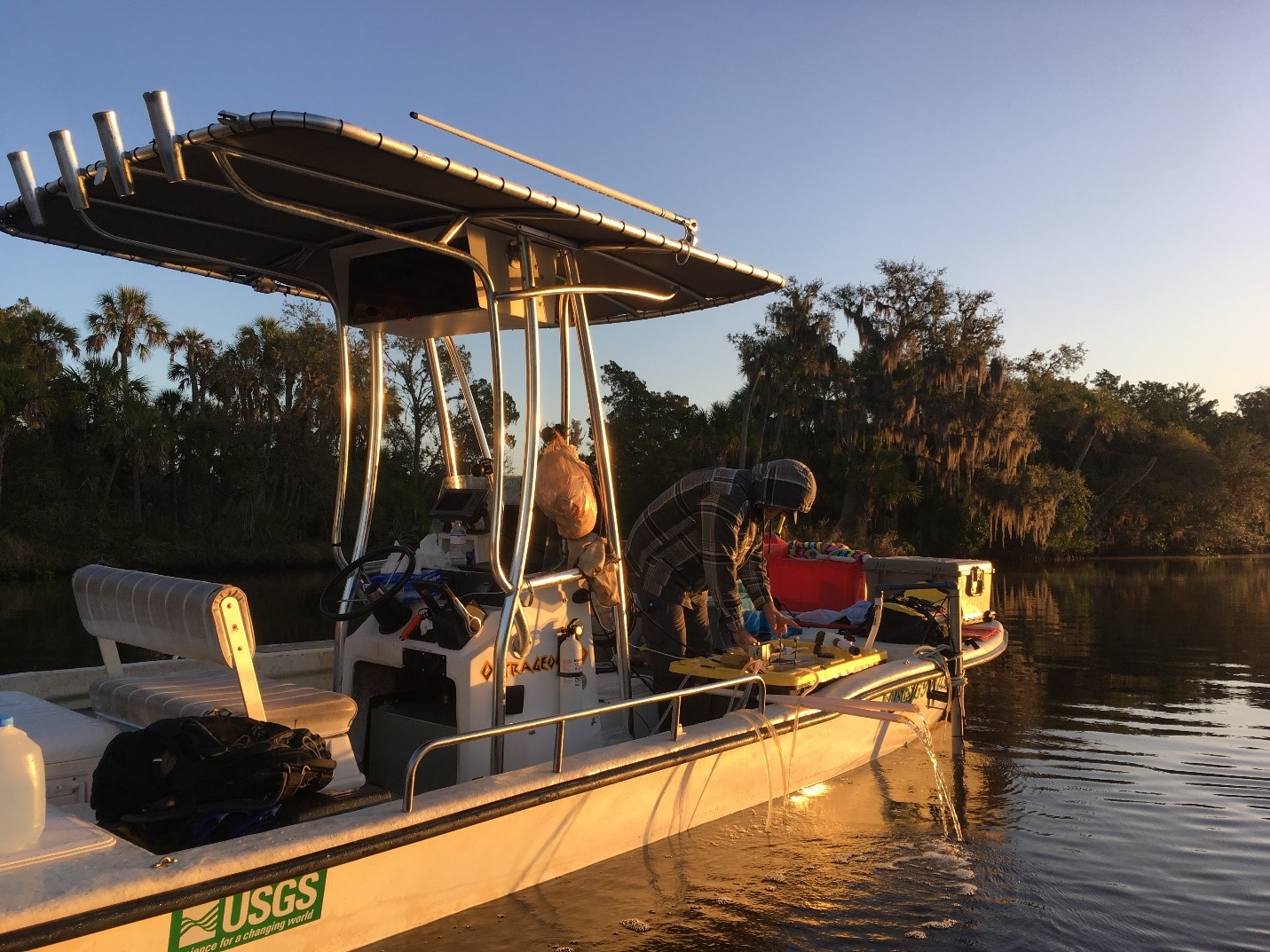 A bit of morning fog eases another day of sampling in the sun. 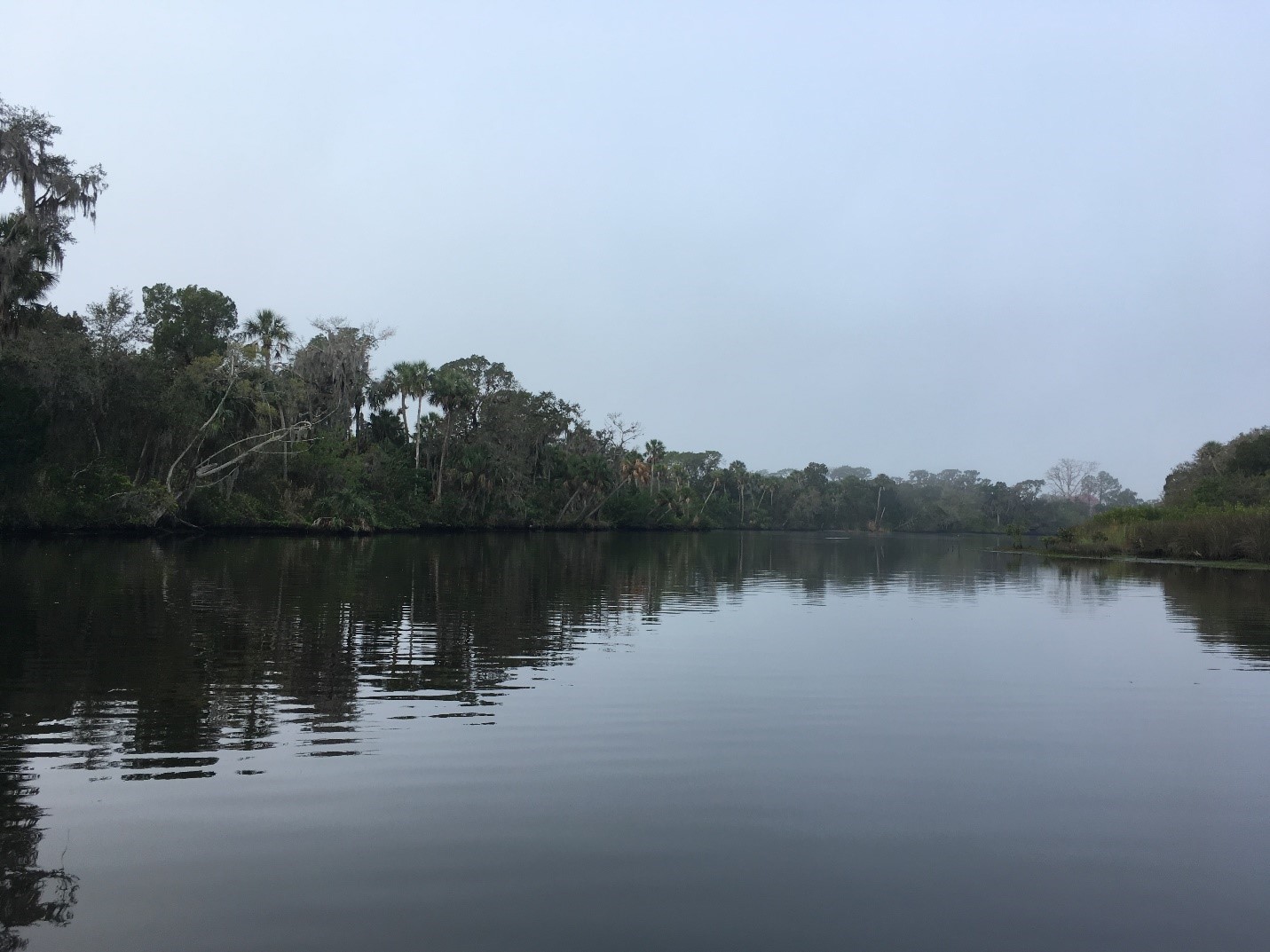 ST. PETERSBURG, FL – Chris Moore, USFCMS student and employee of the USGS, recently completed river 4 of 4 in his dry season water sampling of Tampa Bay rivers as he embarks on a scientific census of sorts to describe the waters of Tampa Bay in relation to the threat of ocean acidification.

I had the privilege of riding along with Moore on the Manatee River for the first river sampling trip.  And by privilege…I’m referring to the kind of satisfaction that an Ironman competitor might enjoy upon crossing the finish line at one of those grueling events (I wouldn’t know exactly – I’m not that crazy.)  While the activity level is not that of an Ironman, 36 hours on a 20’ powerboat can present some challenges to your comfort level.  The experience and the views, however, made it completely worth the extra time spent in cramped quarters.

The key facet of the trips is the 24-hour sampling station on each of the four rivers:  the Manatee, Little Manatee, Alafia, and Hillsborough.  By sampling a single location for 24 hours, one can capture the changes that occur over a diurnal period – that is, a single day and night.  “In this study, the 24-hour sampling is performed to determine daily riverine minimums and maximums in pH and the carbonate system during periods of low and high precipitation to see how each river’s chemistry changes with respect to Tampa Bay – specifically Middle Tampa Bay where Dr. Kimberly Yates of the USGS has an Ocean Carbon System (OCS) deployed that autonomously samples and telemeters CO2 system data hourly,” Moore explained.  View the provisional data here.

Dr. Yates, who is Moore’s supervisor and a Research Oceanographer at the USGS St. Petersburg Coastal and Marine Science Center, has provided much guidance and training over his years at the USGS as well as tactical support for these river expeditions.

To capture that exchange occurring between Tampa Bay and the rivers, Moore begins his sampling trips at a location in the bay and works his way upstream, sampling once every hour.  During 24-hour sampling at the final river stations, that interval increased to once every half hour for blocks of a few hours to increase the temporal resolution of the study.

Using the latest advances in indicator based spectrophotometric pH measurements, Moore was able to sample from the bay up into the rivers without the need to alter methodology for stark changes in salinity and temperature.  At CMS, Moore is a student of Dr. Robert Byrne, Distinguished University Professor of Chemical Oceanography.  Working closely with Dr. Sherwood Liu, an associate of Byrne, Moore has devised a simple flow-through system to discretely sample for pH, dissolved inorganic carbon, total alkalinity and nutrients while traveling from sea to river and vice versa.

Sampling the four major rivers emptying into Tampa Bay, Moore hopes the data will provide insight into the chemical changes taking place as river water mixes into the bay and will act as a baseline data set as coastal acidification intensifies.

Tampa Bay has seen resounding success in water quality improvements over the past several decades which has allowed the seagrass to flourish once again – current acreage is roughly equal to the pristine conditions seen before the pollution of the bay.  Because of the integral role seagrasses play in drawing down CO2, researchers are keen to determine whether the seagrass success has created a Tampa Bay that is net respiring, neutral or net productive, says Moore.

The future of Tampa Bay, from a pH perspective, is in question as water bodies around the globe acidify due to increases in carbon dioxide released to the atmosphere through the burning of fossil fuels, manufacturing of cement, and land-use changes.

Moore looks forward to the wet season (June through September) when he will do it all again – the same four rivers and the same 24-hour sampling stations on each one.  Diurnal sampling in both the dry and wet seasons will round out Moore’s view of the variability in the carbonate system.  To get to the bottom of the question concerning Tampa Bay’s net gains or losses, it will take more researchers using similar methods with the ultimate goal of creating a time series.  A time series allows scientists to say with greater confidence how Tampa Bay will fare in an ocean of change.

Lots of preparation, hard work and some marathon sampling trips make for an imposing task, but Moore sees the end-game – the value of the research – and is up to the challenge.

For anyone interested in Chris’ research and perhaps volunteering to go along on one of his sampling trips later this summer, please contact Chris at csmoore@mail.usf.edu to discuss.