The first shipwreck found in April 2019 by the C-SCAMP team, this ship is about 35m long, 9m wide, and 10.5m tall from the seafloor. This 3-D view indicates depth using color – red is shallowest, and blue is deepest. 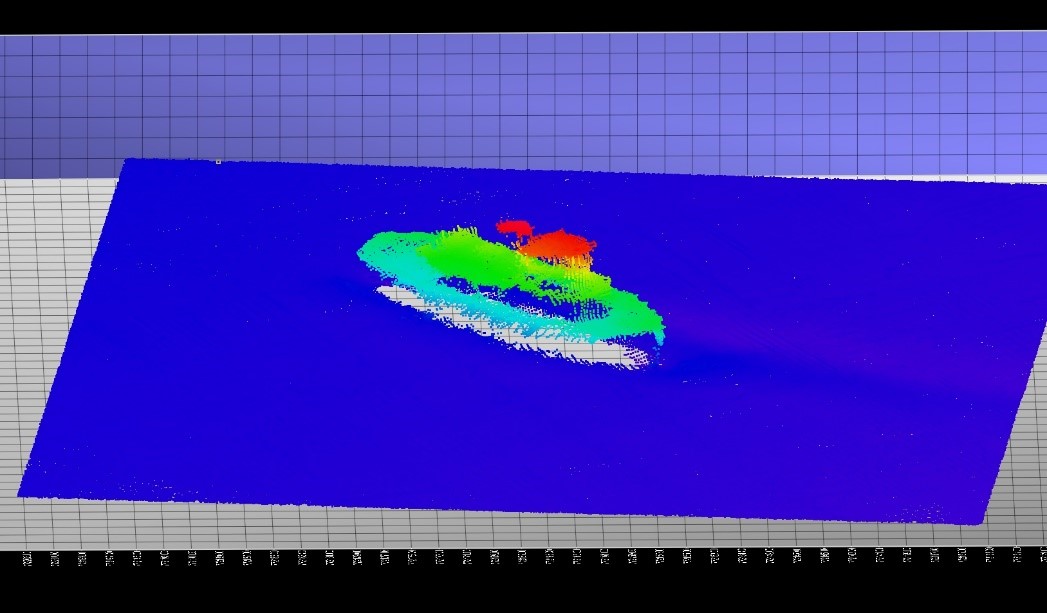 Another wreck found during an April 2019 multibeam survey by the C-SCAMP team. The total pile here is about 30m long. Investigation using towed video revealed that this wreck is not a ship, but something else – pipes, possibly fallen from a cargo ship. The pipes seen in video are the tallest part of the wreck – the four shallowest points in red here, and are almost 4m tall and 10 m long! 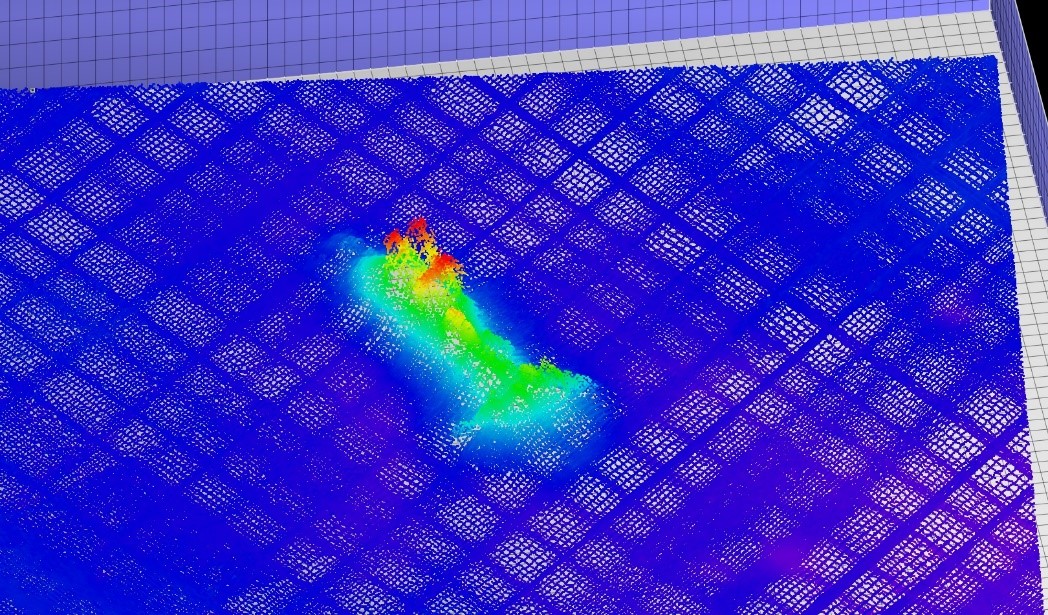 The third wreck found by the C-SCAMP team during the same multibeam survey in April 2019, which looks like a sailboat, though the mast has fallen or broken off. This wreck is about 25m long, 7m wide, and stands 6m tall from the seafloor. The mast is at least 17m long! 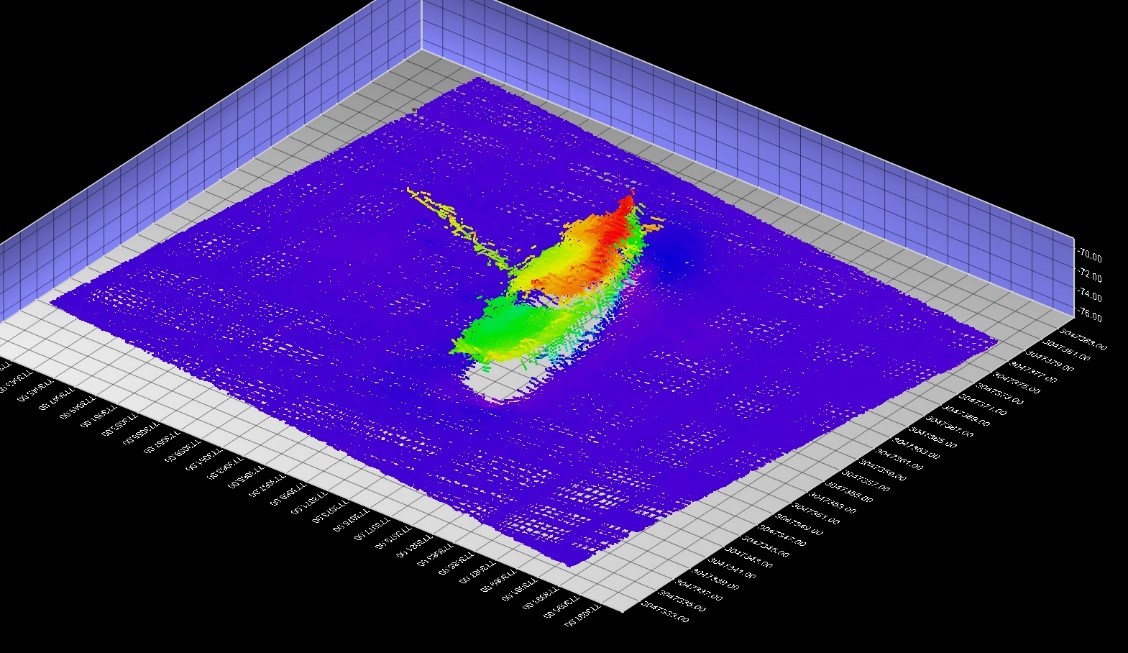 The third wreck found during the April C-SCAMP mapping cruise is shown here from a different angle. Multiple passes are needed to properly build up a detailed image of something like a wreck. 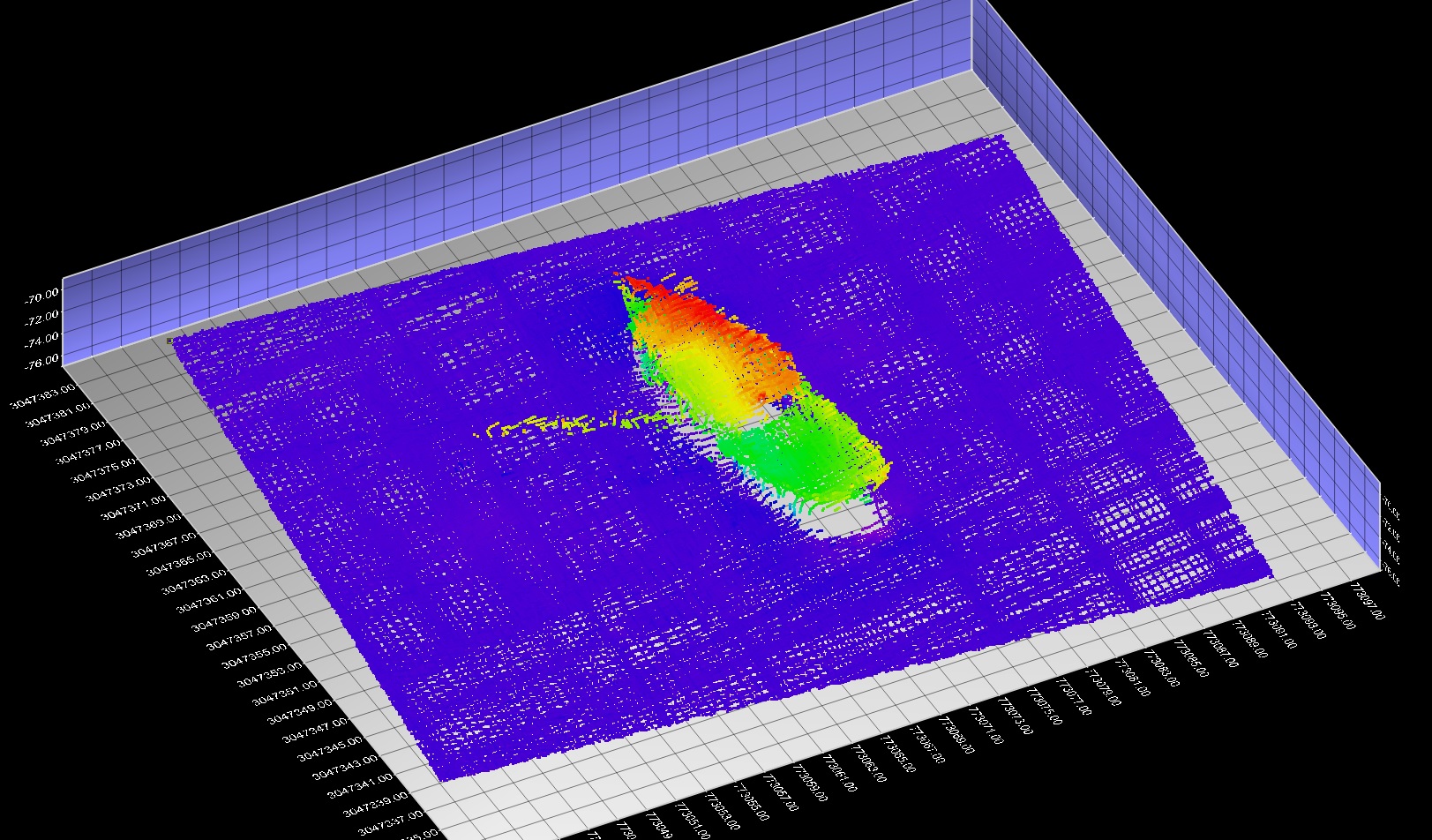 GULF OF MEXICO – Ninety miles west of Tampa Bay, the crew and scientists aboard the R/V Hogarth watched a monitor relaying images of seafloor height captured by the multibeam sonar instrument.

Matt Hommeyer, who was operating the multibeam at the time, immediately recognized a suspicious vertical blip on the outer beams – something he suspected to be a shipwreck.  His hunch turned out to be right.

Hommeyer, who is a Research Engineer at the USF College of Marine Science (USFCMS) and a member of the Continental Shelf Characterization, Assessment, and Mapping Project (C-SCAMP), has enough experience with multibeam mapping to take notice when a feature of the seafloor looks to be more than naturally occurring habitat.

Fellow multibeam scientist on the cruise, Jennifer Brizzolara, explained, “It was the first uncharted wreck we encountered that day during regular, ‘mowing the lawn’ type survey operations.” To build an accurate 3-D image of the seafloor, the multibeam swath on each pass back and forth across an area must overlap – much like mowing a lawn.

The team would go on to find two more wrecks that day in a 28 square mile patch of seafloor, bringing the total to three and surprising everyone onboard.  To give an idea of how rare it is to find undocumented wrecks, the three found on this single day of mapping in early April brought the total for the life of the project to four.  Four newly documented wrecks to add to the public record of dozens of wrecks off Tampa Bay.

To build detailed images of the suspected wrecks, Hommeyer and Brizzolara returned to the location of each wreck, performing multiple passes from several angles to avoid any gaps in data caused by “shadows” from the overlying features.

The first undocumented wreck that the C-SCAMP team encountered was mapped in July 2017 aboard the R/V Bellows.  While working west of the Florida Middle Grounds, the group came across a structure that appeared to be man-made.

This was confirmed in October of 2018 aboard the R/V Weatherbird II after the group was able to “put eyes” on the structure using a towed camera system and FIO‘s remotely operated vehicle (ROV).  They then reached out for some expert opinion and showed some of the footage to Michael Barnette, a marine biologist with NOAA’s National Marine Fisheries Service and founder of the Association of Underwater Explorers.

In email correspondence with the C-SCAMP team, Barnette noted that it “appeared to be a small vessel carrying barrels of concrete,” 19th Century in origin and possibly from the Civil War era.  See the video following this article for some imagery captured by the C-SCAMP team using a towed camera system called the Camera-Based Assessment Survey System (C-BASS).

Finding one wreck, let alone three more, provided an exciting finish to the fieldwork for this project, but the primary mission of the cruise actually had nothing to do with shipwrecks at all.  In last month’s cruise, as in most of their cruises, the C-SCAMP team set out to investigate new ledge and ridge structures that had not previously been mapped and to discover potential habitat for reef fishes.  The project is supported by penalty funds from the Deepwater Horizon accident, administered by the National Fish and Wildlife Foundation (NFWF). Ultimately, the goal is to map all of the West Florida Shelf, an area that is larger than the entire state of Florida.  Read more about C-SCAMP and their ambitious mapping goals.

The importance of mapping the West Florida Shelf is well established, but as for the shipwrecks, Brizzolara, and C-SCAMP scientist and coordinator Sarah Grasty, are not exactly sure who is most interested in knowing their whereabouts.  They’re curious to see what the response will be from the archaeologists and resource managers.  Anyone interested in collaborating or learning more about these wrecks can contact the project by emailing cscampdata [at] usf [dot] edu.

The wrecks do not –upon first glance– appear to offer much for treasure hunters, but the C-SCAMP team is certainly open to sharing wreck locations with sport divers, fishers and others.

For anyone interested in hearing famed wreck hunter David Mearns explain the mysteries of some of the world’s most famous shipwrecks, this USF College of Marine Science alumnus will be speaking at the Mahaffey Theater in St. Petersburg, FL on Tuesday, May 7, 2019.

First mapped by multibeam echosounder sonar, then imaged by a towed camera system, the group later returned with an ROV to capture a more detailed view of what appears to be a small, 19th Century vessel that was carrying barrels of concrete.”