ST. PETERSBURG, FL – Although researchers in the Breitbart Lab­­­ are typically chasing new viruses, it is often difficult to find an actual host for the viruses they discover. However, sometimes the right samples appear and virus discovery comes with a host match.

In a recent publication, lead author Dr. Karyna Rosario describes two new viruses identified in the ‘crab-like’ spiders known as spinybacked orbweavers. The team wanted to assess if the viruses, named  spinybacked orbweaver circular virus (SpOrbCV) 1 and 2, were actually infecting the spiders.  By testing different spider life stages—adults, eggs, and spiderlings—they determined that SpOrbCV-1 is prevalent throughout all the life stages and specifically associated with spinybacked orbweavers.  In contrast, SpOrbCV-2 seems to accumulate in the spinybacked orbweavers through their prey since this virus was also detected in other top insect predators, including dragonflies and other spiders.

SpOrbCV-1 is the first known example of a vertically transmitted virus in spiders.  The virus is passed from parents to eggs.  And, an interesting yet sci-fi kind of creepy fact is that some insect-infecting viruses are able to control the sex ratio of their host—skewing the host population towards females or males.  By increasing the number of females, a maternally transmitted virus increases its own chance of survival.

As part of an NSF funded grant to expand the tree of life, Rosario, Dr. Mya Breitbart and colleagues are on a mission to find single-stranded viruses in all forms of life, whether marine or terrestrial.  SpOrbCV-1 is a tiny virus with a genome size of only 2000 bases and only 2 genes, which is less than half the size of viruses that cause the common cold in humans or 25 times smaller than the average genome size of viruses infecting bacteria.  The prevalence of SpOrbCV-1 allowed the researchers to take a deeper look at the virus by designing assays that allowed them to confirm its single-stranded genome structure and show that the virus was replicating within spider tissues.

Read the paper (paywall) or download a free copy from USF Scholar Commons. 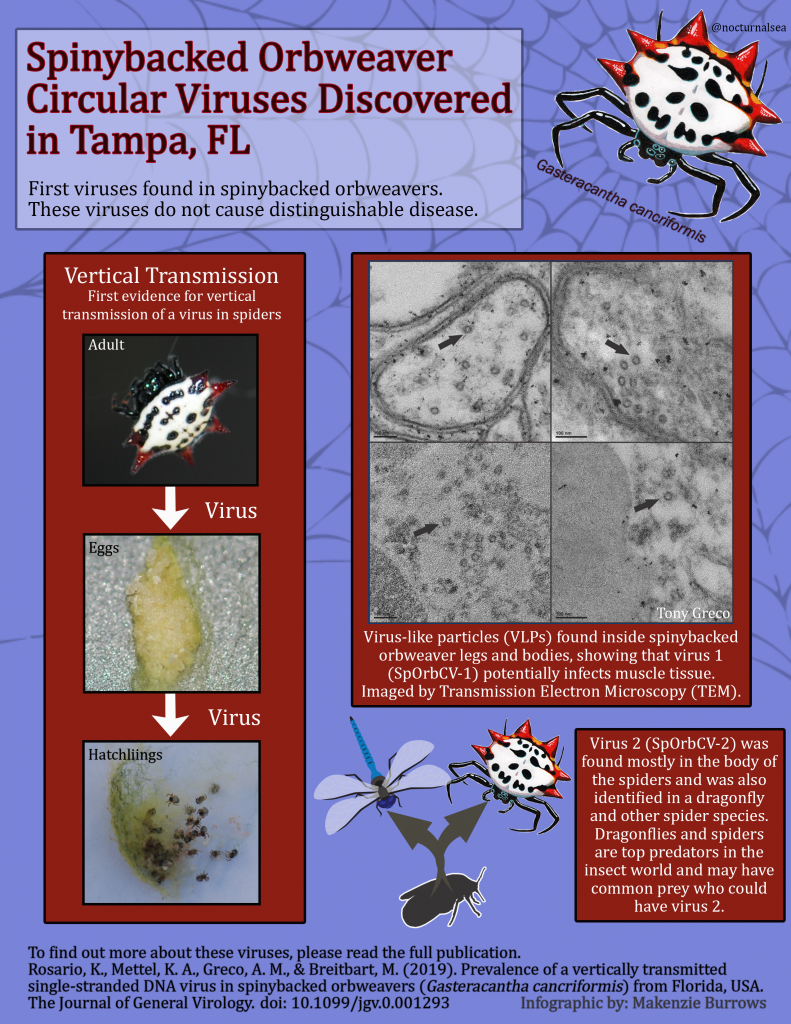