Mapping All of Florida’s Seafloor Leaps Closer to Reality

After years of advocacy and hours of planning and coordination meetings on the part of numerous groups in Florida, there is reason to be hopeful that the state may receive a significant breakthrough in the quest to map its coastal waters (0 to 200 meters depth) by the end of this decade.

An appropriations request (HB 3495) was filed with the Florida House of Representatives in early February of this year, prepared by a private survey company. Since then, it has received support from its assigned Infrastructure & Tourism Appropriations Subcommittee who voted unanimously in favor of the request in mid-March.

The $9.8 million dollar project now awaits its fate with the House Appropriations Committee before moving to the Senate. If approved, it would be assigned to the Florida Division of Emergency Management who would use a competitive proposal process to distribute the funds to private, state, academic, and federal groups to complete the mapping surveys.

More recently, two additional pieces of legislation supporting coastal seafloor mapping (HB 7019 / SB 1954 and HB 7021/ SB 2514) made it through the Florida Senate with significant bipartisan support. If these bills pass, the legislation would create the Resilient Florida Grant Program, along with an associated trust fund for continued operation.

This Resilient Florida Grant Program includes a $100 million project under the Florida Department of Environmental Protection for seafloor mapping in coastal and offshore zones, which would make a considerable dent in Florida’s unmapped seafloor that currently comprises nearly 80% of the State’s waters. At the time of this article’s posting date, bills SB 1954 and SB 2514 have both been routed to SB 2500 for appropriations.

Making it this far with multiple funding bills on the table has not been an easy feat, but a consistent driving force championing seafloor mapping work for the last several years has been the Florida Coastal Mapping Program (FCMaP). FCMaP was formed in 2017 and was born out of a collaborative, grassroots effort among several state and federal entities. 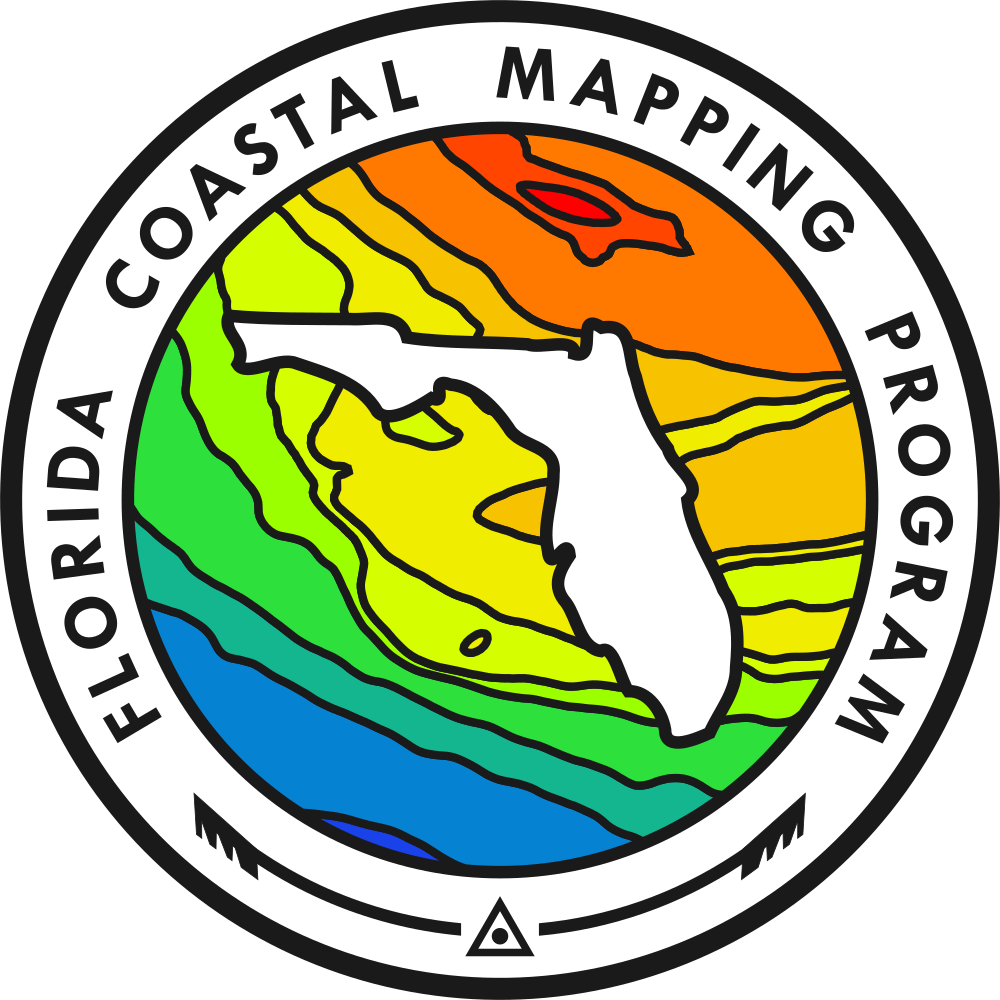 The Florida Coastal Mapping Program (FCMaP) formed in 2017 and includes representation among several groups from the State, Federal, and Private sectors within Florida.

The coalition was originally set up to have State and Federal co-chairs (United States Geological Survey [USGS], Florida Institute of Oceanography [FIO], and the Florida Department of Environmental Protection [FL-DEP]) overseeing a broader steering committee representing numerous State and Federal agencies, including the USF College of Marine Science (USFCMS), Florida Department of Transportation (FLDT), Florida Fish & Wildlife Research Institute (FWRI), Florida Geological Survey (FGS), Florida Division of Emergency Management (FDEM), National Oceanic and Atmospheric Administration (NOAA), US Army Corps of Engineers (USACE), and US Bureau of Ocean Energy Management (BOEM). FCMaP is currently undertaking a reformulation of its programmatic structure and in the future will have a program management team of the same participating agencies, but not in a hierarchical structure.

FCMaP’s mission is to collaborate and facilitate “high-resolution Florida coastal seafloor data, from the shore to the continental shelf” by 2028. Cheryl Hapke, PhD, a research faculty member at the USF College of Marine Science, is the FCMaP program coordinator, a position that she’s done tirelessly and enthusiastically since 2017, first with the USGS and now with USF.

“Though FCMaP was formed only about four years ago, the need for high-resolution seafloor maps of Florida’s state and federal waters has been a priority of scientists and managers for decades so we had a lot to build off of, but there was a broad lack of coordination among State, Federal, academic, and private stakeholders,” says Hapke.

The diverse group of stakeholders at the helm of this effort highlights the importance of mapping Florida’s waters; improved maps will provide key information for fisheries scientists to better understand habitat extents and distributions, result in better navigation maps, improve storm surge models during large storms and hurricanes, and can help determine optimal locations to mine for sand to renourish the State’s many beaches. In brief, seafloor mapping has significant bearing on several different facets of Florida’s economy and environment. 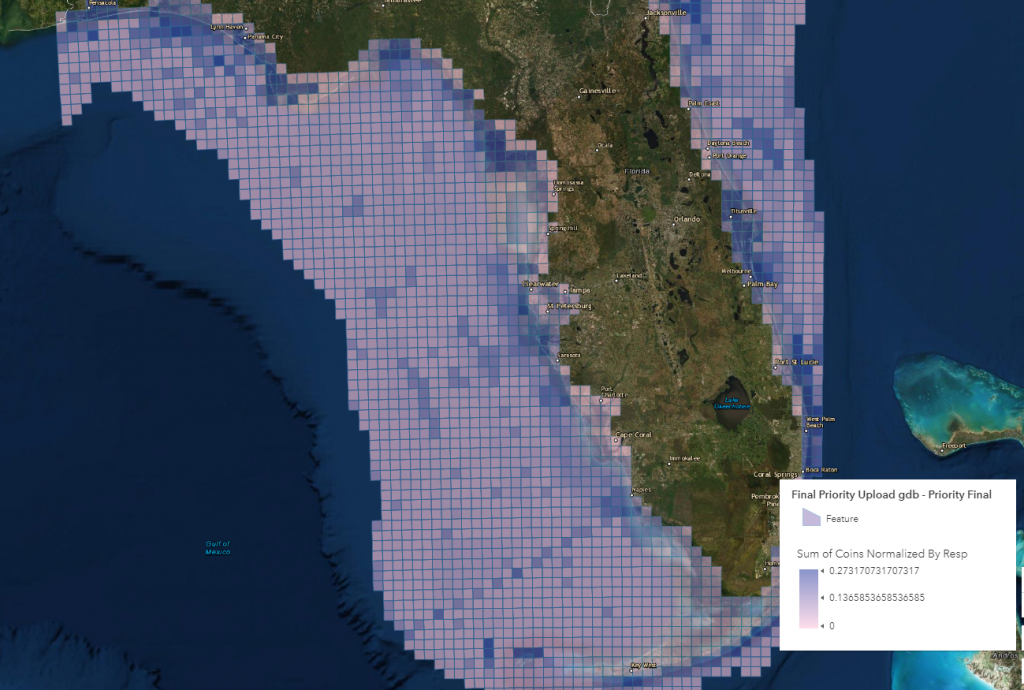 The results of the FCMaP stakeholder prioritization survey. This map displays the Mapping Priority Index values across the state’s waters. For more information, visit their GIS portal.

When FCMaP formed in 2017, they immediately completed a comprehensive inventory of all seafloor elevation (bathymetry) data that existed for Florida’s waters. This then allowed FCMaP to complete a detailed gap analysis by the end of their first year that was presented to their stakeholders during a workshop in January 2018. This meeting was a milestone for FCMaP as it resulted in significant buy-in from their diverse stakeholder group and also provided them their assignment for the next year – a formal mapping prioritization survey and analysis. The prioritization was extensive and involved workshops throughout the state. It was completed in 2019 and the analysis wrapped up in 2020; FCMaP is now working on assimilating all of their data and knowledge into a strategic roadmap for mapping Florida’s coastal seafloor priorities.

Despite lack of financial support thus far, through in-kind contributions of time and resources by FCMaP’s member institutions on this effort over the last few years, FCMaP has laid a solid foundation to hit the ground running when funds are available – further testament to the importance of its mission. 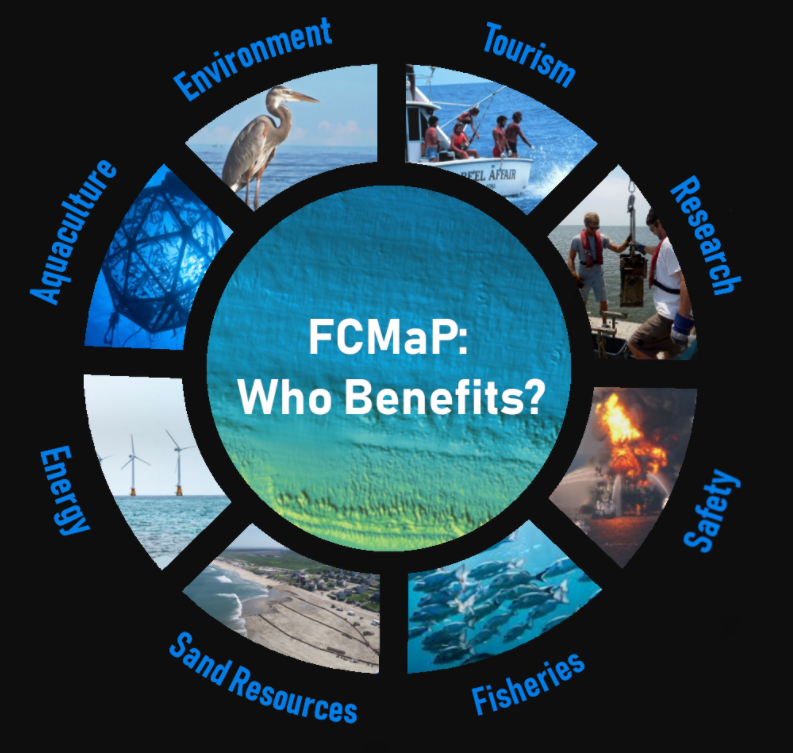 The FCMaP’s stakeholder group is diverse and reflects the immense environmental and economic benefits of mapping Florida’s coastal and offshore areas.

Collaboration is Key to Success

In addition to the excitement around potential near-term funding from the State, FCMaP also has reason to look forward to new opportunities through collaboration with the Center for Ocean Mapping and Innovative Technologies (COMIT); FCMaP coordinator Hapke is also a co-PI on the new Center which well-positions her as a liaison between the two entities.

“There is a great opportunity for synergy between COMIT and FCMaP and that starts by making sure we don’t duplicate efforts. The next layer of this is ingesting COMIT’s findings on what survey approaches will help us map Florida’s waters most efficiently to meet our 2028 goal and work with our stakeholder entities doing the mapping to employ those methods,” she said.

Beginning in late-summer of 2021, COMIT will delve into its inaugural field-testing projects after delays due to COVID-19 restrictions. One of the Center’s first experiments is using an unmanned surface vehicle, or UxV, equipped with a multibeam echosounder (MBES) to map shallow areas in Tampa Bay.

The challenge is that this equipment is just recently becoming standard kit for the mapping community, and they’ve not been extensively tested and used in Florida’s waters – this is where COMIT comes in. The work done over the next year or so by the Center will provide important data and information for entities like FCMaP to learn about what equipment and platforms are most efficient for different water depths and environments throughout Florida and help ensure the state achieves full mapping coverage of Florida’s seafloor by 2028.

As well summarized by Hapke, “It’s thrilling to finally see large seafloor mapping funding proposals making their way through the State legislature. My colleagues and I are anxious and ready to get started and to see what new and exciting things we uncover as we learn more about what’s beneath Florida’s waters.”

For a more comprehensive review of FCMaP, including more detail on prioritization for mapping Florida’s waters, please visit their website and read their publication here. For more news on COMIT’s field campaigns and progress on FCMaP’s endeavors, follow the Center on Twitter (@USFcomit).