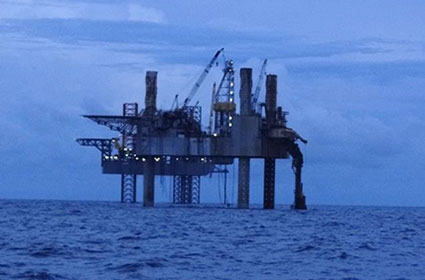 In the approaching daylight we caught our first glimpse of the damaged Hercules #265 gas rig, and its companion relief well.

Sunday morning, August 25, 2013 dawned grey and blustery off the central coast of Louisiana. In the approaching daylight we caught our first glimpse of the damaged Hercules #265 gas rig, and its companion relief well. In stark contrast, one was a darkened and burned-out hulk, with equipment and cables draped over the sides of the rig platform. The other was a bustling hub of activity and lights, with supply boats busily unloading equipment and rig workers. Wanting to achieve as much as we could in the single day we had allocated to sampling near the rig, the GoMRI-supported scientific party aboard the R/V Weatherbird II had breakfast long before dawn and was ready to deploy the myriad of instruments it would use to evaluate if traces of hydrocarbons still surrounded the failed rig – in the sea water, on the bottom, in the fishes nearby, and in the air.”

“Armed with results from sea surface drifters deployed by our colleagues aboard the R/V Acadiana cruise a month earlier, we chose to sample primarily to the south and east of the failed rig, where drift patterns suggested hydrocarbon traces would be, if present. Starting at a location as close as safety would allow, sampling was conducted in three phases at 0, 5 and 10 nautical miles from ground zero.”

“Approaching to within 200 meters of the Hercules rig, the first equipment deployed was the CTD, providing surface-to-bottom temperature and salinity profiles and water at various depths from the surface to the bottom 44 meters below. Water samples will be used by Wade Jeffrey’s laboratory at the University of West Florida to characterize the microbial community diversity next to the well and to search for enhanced levels of methane-consuming bacteria. Sara Lincoln, a post-doctoral researcher at Pennsylvania State University will also use water samples to characterize microbial dynamics in the vicinity of the well. Additional water samples were collected in serum vials by Samantha Bosman of Jeff Chanton’s Florida State University laboratory to test for elevated methane levels in seawater. Samantha opened several sealed canisters on the bow of the Weatherbird II to collect air samples for the potential presence of methane still being released from the crippled well.”

“Following the deployment of the CTD, scientists and technicians from Steve Murawski’s laboratory at the University of South Florida set 5 miles of longline fishing gear to sample the fishes in a continuous line to the southeast of the well. A total of 508 baited hooks (100 per nautical mile) was set along the track. Scientists aboard the Weatherbird II then retrieved the longline noting the sequential hook number of each catch. A total of 64 fishes, including red snapper, king snake eel and a variety of sharks were caught. Sub-sampling of the 26 red snapper included collection of fish bile, which yields to subsequent GC-MS analysis a sensitive biomarker of recent hydrocarbon (PAH) contamination.” After the longline set, CTDs were taken at 5 and 10 nautical miles from the well. These data will be used to determine if trace amounts of petroleum exist in the water and if they decline in concentration with distance.”

“The final equipment deployed at 0, 5 and 10 miles from the well was the multicorer sediment sampling system from David Hollander’s laboratory at the University of South Florida. The multicorer collects 8 simultaneous 4″ diameter sediment tubes; when appropriately analyzed sediment data can provide a chronological record of sediment type, grain size and contaminant loads. By analyzing for the decay of radionuclides of thorium and lead, the sediments in various levels of the core can be accurately dated. These cores will be analyzed for traces of hydrocarbons at the top of the core indicating recent contamination.”

“It was late in the afternoon when the final sediment core from the vicinity of Hercules #265 was aboard and the Weatherbird II resumed its primary mission–sampling for residues from the Deepwater Horizon oil spill.”

The C-IMAGE consortium was one of 12 consortia selected for…

A summary of the MOSSFA Town Hall Meeting from the…

The Technical University of Hamburg at Harburg (TUHH) hosted the…