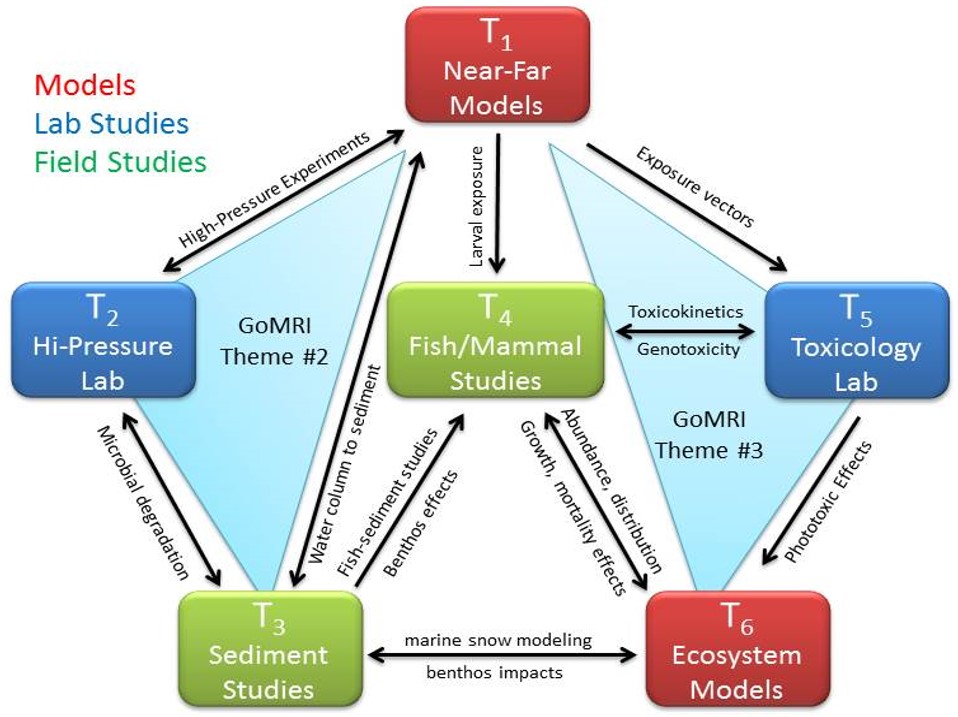 The Deepwater Horizon (DWH) oil spill was unprecedented in the long history of maritime oil exploration and production. Response agencies and production companies were underprepared to deal with the unique challenges of a deep blowout.  Given the large gaps in our knowledge of blowouts, the overarching objective of C-IMAGE is thus: to advance understanding of the fundamental processes and mechanisms involved in marine blowouts and their environmental consequences, ensuring that society is better-prepared to mitigate such future events.  With previous GoMRI support, C-IMAGE developed and published a wide variety of models, field and laboratory-based data and methods to determine the fate of oil in the environment, monitor the impacts of the spill and document ecosystem recovery. Evaluation of the fate and consequences of the DWH oil are critical to predicting the behavior of other deep-water discharges and to aid in developing future response strategies.  Process-oriented research of the unique chemical, geological, and biological aspects of the spill has been facilitated through integration of field, laboratory and modeling studies and ecological assessments.  For example, C-IMAGE researchers developed models and conducted high-pressure experiments to explain phenomena near the well head. Modeling results indicate that deep plume formation was controlled primarily by extreme pressure and temperature conditions.  C­IMAGE researchers documented a substantial quantity of DWH oil in deep-sea sediments resulting from unprecedented oiled-snow deposition and the plume intersecting the seabed.

This proposal focuses both on extension of work started under the initial C-IMAGE project, along with three new initiatives: (a) field work at the IXTOC-I blowout site off Mexico, (b) establishment of a marine exposure facility for fishes, and (c) a Gulf-wide assessment of fish and sediment contamination to better understand and predict oil fate and impacts of DWH and other spills. Focusing on GoMRI’s research Themes 2 and 3, C-IMAGE researchers will conduct studies in six Tasks: (1) near-to-far field modeling, (2) high-pressure experimentation, (3) sedimentation of oil and its impacts, (4) impacts on the abundance, contamination and population dynamics of fishes and marine mammals, (5) toxicology studies, and (6) ecosystem modeling.  While research in these six tasks will significantly advance oil spill research, this proposal is transformative in its focus on the integration of science among the six tasks to produce fundamental understanding of basic processes of marine blowouts and resulting ecosystem impacts.

Near- and far-field modeling studies (Task 1) will focus on the goal of refining our understanding of the dynamics of high pressure oil/gas/water jets, and the formation of plumes and other near-field dynamics.  Critical questions persist about the significance of dispersant injection at the well head in preventing oil from surfacing.  Previous C-IMAGE modeling forecasted plume formation at varying depths irrespective of dispersant use.  How much then, did deep dispersant injection contribute to formation of sub-surface plumes?

This question must be answered in order to justify the emerging paradigm of dispersant application in deep blowout response.  In Task 2, C-IMAGE researchers will expand high pressure-low temperature experimentation to include the use of dispersants to understand the resulting particle size distributions measured with a novel endoscopic camera.  Additionally, high-pressure experiments will be conducted to better understand hydrate formation and biodegradation rates in the deep sea, compared to the surface, and to characterize the behavior of multiphase flows (e.g., oil, gas and emulsions). As a part of the strategy to move from the specific effects of DWH to a more general understanding of marine spills, C-IMAGE will examine “families” of oil to predict the behavior of a range of oil types (heavy, light, gas-oil ratio), with varying pressures, temperatures, flow rates and oceanographic conditions.

Previous C-IMAGE research documented a marine oiled snow sedimentation and flocculent accumulation (MOSSFA) event, wherein a substantial portion (4-10%) of the DWH oil reached the seabed.  In Task 3, C-IMAGE researchers propose to continue documenting impacts and recovery through compositional changes in sedimented oil and toxicity declines of sediments by repeat sampling at 16 priority coring sites in the northern Gulf of Mexico (NGoM), near the well head.  Mass accumulation of sediments and oil has since declined towards pre-spill levels, as revealed by vertical chronologies based on radioisotope decay.  In some locations invertebrate infauna were completely killed by the MOSSFA event, followed by recovery, whereas other sites have yet to recover.  Continued sampling will allow documentation of the recovery process and the results will inform ecosystem modeling studies.

Is a “MOSSFA-like” event the rule or the exception for marine blowouts?  To test the hypothesis that oiled marine snow accumulation is a probable outcome, C-IMAGE will collect and analyze sediment cores from the Campeche region off Mexico, in the vicinity of the IXTOC-I marine blowout (1979-1980). 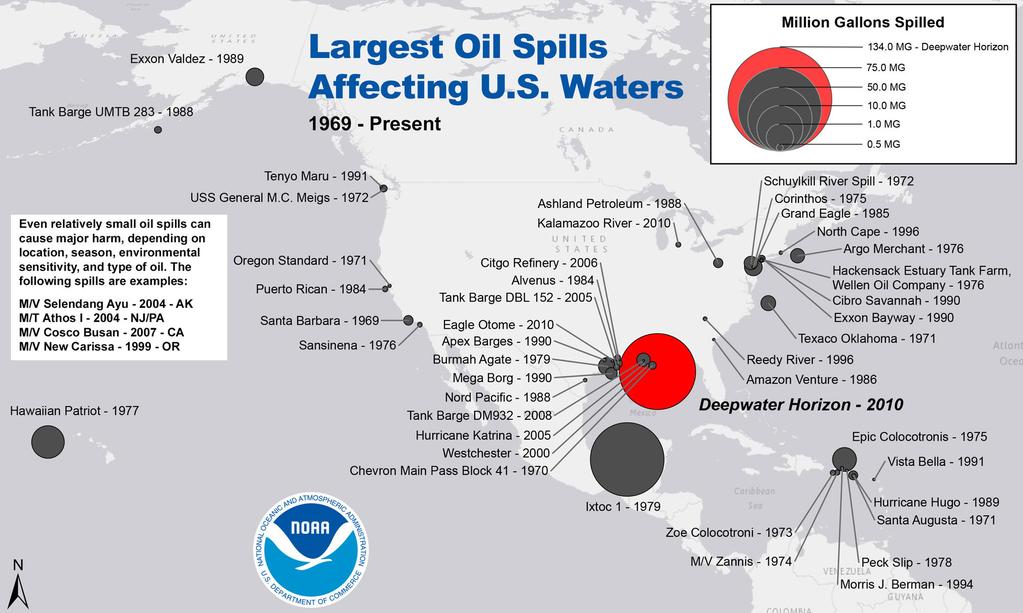 Preliminary studies of existing core material from there provide strong evidence that a similar MOSSFA event occurred.  This initiative will bring new expertise into the C-IMAGE consortium including the Universidad Nacional Autónoma de México. Documenting IXTOC-I pollution in sediment samples and biota in the Southwest Gulf of Mexico will serve as a powerful analog enabling comparisons to the DWH blowout and prediction of what will remain of the DWH oil three decades into the future.

Sampling of fishes (Task 4) in the vicinity of the DWH documented a decline in skin lesion frequency and in polycyclic aromatic hydrocarbon (PAH) metabolites in red snapper bile following the spill.  Contaminant uptake and depuration, however, varied among species.  Tilefish (a burrowing species) have relatively high bile PAH metabolites showing no obvious decline, whereas king snake eel (also a putative burrowing species) have much lower concentrations.  Changes in fish community composition and declines in recruitment of several species including red snapper were also documented.  This work will continue to better understand the role DWH played in species and community dynamics, including marine mammals.  Task 4 researchers will also conduct the first Gulf-wide toxicology assessment of continental shelf fishes ever undertaken, that includes Mexico.  Longline survey data will provide a comprehensive tissue archive with which to assess effects of DWH, for evaluating variations in oil contamination around the GoM and for developing baselines for evaluating the impacts of future oil spills.  Red snapper, sharks and tilefish from the Gulf-wide survey will be used to describe spatial connectivity of species throughout the GoM and for identifying potential genetic changes in fish exposed to DWH and IXTOC-I oils.

Toxicology studies (Task 5) revealed elevated rates of fish DNA damage in the vicinity of well head.  For the first time researchers identified the genetic sequences in two species coding for cytokines that are involved in wound healing and contaminant response.  Under Task 5, an oil exposure test facility at the Mote Aquaculture Park will be established, to understand how contamination pathways (water, sediment, food) impact adult fishes, and to develop novel biomarkers for oil such as cytokine expression and otolith elemental composition. Two representative species (southern flounder and Florida pompano) will be used to test chronic and acute exposures to a range of dispersant and oil concentrations.  Existing and new methods to evaluate mutagenicity and genotoxicity in contaminated water and sediment exposures will be used.  Toxicokinetic models of contaminant depuration will integrate field data and experimental results.  Phototoxicity of oil/dispersant mixtures on plankton and laboratory studies of the formation of marine snow in the presence of lithic and biological components will inform models of MOSSFA formation.

Ecosystem models (Task 6) combine field-derived data and laboratory studies in quantitative frameworks to allow hind- and forecasting of the balance of tradeoffs in response actions to oil spills.  Two ecosystem modeling frameworks are supported: one focusing on low trophic levels and modeling marine snow formation (ZOOSIM) and the other focused on high trophic levels (Atlantis).   The ZOOSIM models will simulate, in 3-D, the formation and deposition of marine snow and the roles of biological interactions among low trophic levels.  Atlantis will include an ecosystem services module and be used to understand the impacts of response efforts including the use of large fishery closed areas as happened during DWH.

Education and Outreach activities will be a focal point of the C-IMAGE consortium, including expanded Teacher-at-Sea and classroom experiences, public outreach through audio, slide and video productions, and engagement of post-doctoral scholars and graduate students by sponsoring a multi-consortium “young scientists” symposium, focused on oil spill science and building enduring research networks.