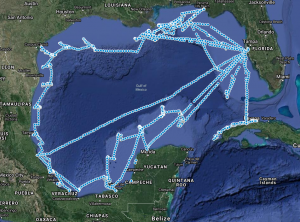 Researchers will circumnavigate the Gulf of Mexico during the One Gulf Expedition this summer studying the Deepwater Horizon and Ixtoc I spills. Sediment coring, bottom long line fishing and water samples are planned through the month long expedition.

In Summer of 2015, C-IMAGE, with help from the Florida Institute of Oceanography (FIO) and the Universidad Autónoma de Mexico (UNAM), continued their northern Gulf expedition known as the Mud & Blood cruises. They also traveled to the southern Gulf of Mexico where they collected sediment cores and fish samples from areas affected by both the 1979 Ixtoc-I blowout.