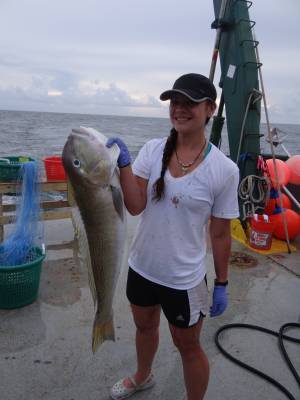 Greetings from the northern tip of the Desoto Canyon!

After two slow days of fishing, we hit a couple of excellent sampling locations yesterday and were up until 2 AM processing all of our tilefish.  When a fish comes up we have to rapidly bleed it and collect a few very time-sensitive organs.  We use almost every organ of the fish, so each dissection is quite exhaustive.  Afterwards, the fish are filleted by the crew and everyone furiously tries to scrub scales and blood off of themselves and sleep as much as possible before the next long line set.

My work concerns the immune system of fish.  Fish are fascinating because they are so ancient, in evolutionary terms, and so diverse, but they still contain nearly all of the important immune system components we see in more recently evolved mammals, including humans.  The tricky part is that not many people have thoroughly examined immune molecules in non-model fish species, so many of the things we can look at right now to gauge fish health are rudimentary.  My job for my PhD is to try to tie in some traditional immune markers with emerging targets and get a better snapshot of fish health in the Gulf of Mexico.

Until next time, so long and thanks for all the fish!