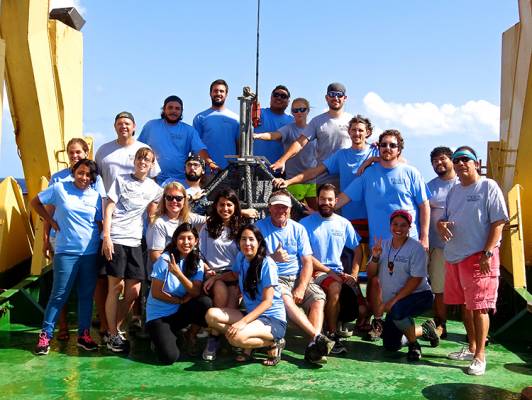 As of 10:30a EDT, the R/V Justo Sierra, crew and C-IMAGE researchers are back in port at Brownsville, TX and the first of our summer cruises is in the books. Researchers will begin dividing cores for analysis back to their respective universities, where the real work begins to uncover the mysteries of Ixtoc.

As the coordinator and co-chief scientist for this cruise, I was able to witness nearly every aspect of this cruise materialize, from conception to execution. By the numbers, the cruise was a great success. Our science party represented eight institutions and collected samples for a total of sixteen different laboratories from more than ten institutions. Despite some initial delays (e.g. leaving Tuxpan 48 hours behind schedule due to equipment shipping delays) we were still able to retrieve water measurements, water samples, and sediment samples from 37 of our planned 50 sites. This is in addition to deploying the instruments twice at five priority sites and only missing retrieval of sediments at one out of twenty priority sites. But numbers can only say so much about the success of a cruise.

The real success story is how well the science party and the Justo Sierra crew functioned as a team. I am grateful for all the hard hours that everyone worked, often waking up before their shift and sometimes working many hours after their shift until all the work was done on deck and in the labs. By the second site, the entire science party had the deck and laboratory operations down to…well…a science.

This cruise would not have been possible without support from the groups at UNAM-ICML, who not only expedited the shipment of equipment to Tuxpan, but also helped with customs and port operations in Brownsville. We are very grateful for their assistance onboard and off.

Amongst all of the science operations and business to be done, we tried to keep it fun onboard. More so than all of the work, most of us will probably remember the great people, the Sunday barbecues, the sunsets, the Abkatun gas flares, the midnight movie screenings, minion cookies, avenger stickers, and quotes that are only funny at 3:30 in the morning after a long shift. But most of all, I will always remember how well the science party and the crew came together to make such a successful cruise.

As we pull into the port of Brownsville, I can only hope that this cruise and the samples we collected will provide a platform for the many groups affiliated with CIMAGE to produce great science and many publications, provide a repository of valuable samples for future studies, strengthen the network of young scientists studying the Gulf of Mexico ecosystem, and ultimately contribute to the legacy of C-IMAGE and GOMRI.

Signing off from the Justo Sierra,