“Dispatches from the Gulf,” a new episode in the series “Journey to Planet Earth,” (www.dispatchesfromthegulf.com) shares the first-hand accounts of scientists studying the recovery of the Gulf of Mexico since the 2010 Deepwater Horizon disaster. The film also incorporates the impact the 3-month long spill had on fishermen in the Gulf, mainly in Louisiana.

In 2010, the Deepwater Horizon (DWH) oil platform exploded in the northern Gulf of Mexico, killing 11 oil workers and leading to the release over 200 million gallons of oil from the sea floor, 4,900 feet deep.

Concerned researchers from across the Gulf, like the Florida Institute of Oceanography, took swift action to document the impact of oil and dispersants on marine life and Gulf ecosystems in the months following the spill. An independent research group, the Gulf of Mexico Research Initiative (GoMRI, www.gulfresearchinitiative.org/), established a 10-year research plan following the oil spill and developed consortiums studying different aspects of oil spills. ‘Dispatches from the Gulf,’ a GoMRI funded film, highlights the work of these consortiums, in particular scientists the Center for Integrated Modeling and Analysis of Gulf Ecosystems (www.marine.usf.edu/c-image).

Dr. Steven Murawski, Professor at the USF-College of Marine Science and Lead Principal Investigator of C-IMAGE (a GoMRI funded consortium), is featured throughout the film for his work on fisheries impacted by Deepwater Horizon.

“Our major focus is to see if contamination from DWH persists, and how it might have affected species and fish communities,” said Murawski. His work aboard the R/V Weatherbird II is known as ‘Mud & Blood’ for the ocean muds and fish tissues collected. “My students and I were seen sampling the fish community offshore of Louisiana in the general vicinity of the Deepwater Horizon oil spill. We have sampled this region every year since 2011 to look for oil residue in fishes and the abundance of species and communities,” Murawski said.

Dr. Will Paterson (Dauphin Island Sea Lab, Alabama) is featured in the documentary studying artificial and natural reefs in the Gulf of Mexico via remotely operated vehicles, or ROVs. From the cabin of his boat, Patterson uses cameras and joysticks to count and measure fish living on the northern Gulf reefs.

Patterson made a surprising discovery in his work post-DwH: Lionfish began dominating reefs in the years following the oil spill. These ‘invasive exotics’ compete for the same food as native Gulf species, causing native fish populations to decline. Patterson and his lab share more detail of their efforts in the film and continue to monitor Lionfish presence on reefs.

Amy Wallace is a PhD student at the USF College of Marine Science using fish eyes and ear bones called “otoliths” to recreate the fish’s life history. Amy is a leading member of the ‘Blood’ crew and recalls working with the film crew on one hot, summer day. “Everyone was so nice and really focused on telling the full story of the science,” Wallace explains. “It was really busy when we are processing fish from our long-line catch and I hardly noticed the film crew was even there!”

The fish tell just one half of the story USF researchers are studying from the Gulf, the sea floor muds and sediments tell the other. Ten percent (20 million gallons) of all oil spilled deposited on the sea floor, impacting sea bottom (‘benthic’) communities. Dr. Isabel Romero, a researcher at the USF-College of Marine Science studies these sediments by using layered mud cores as pages in time features her work on the ‘Mud’ crew. 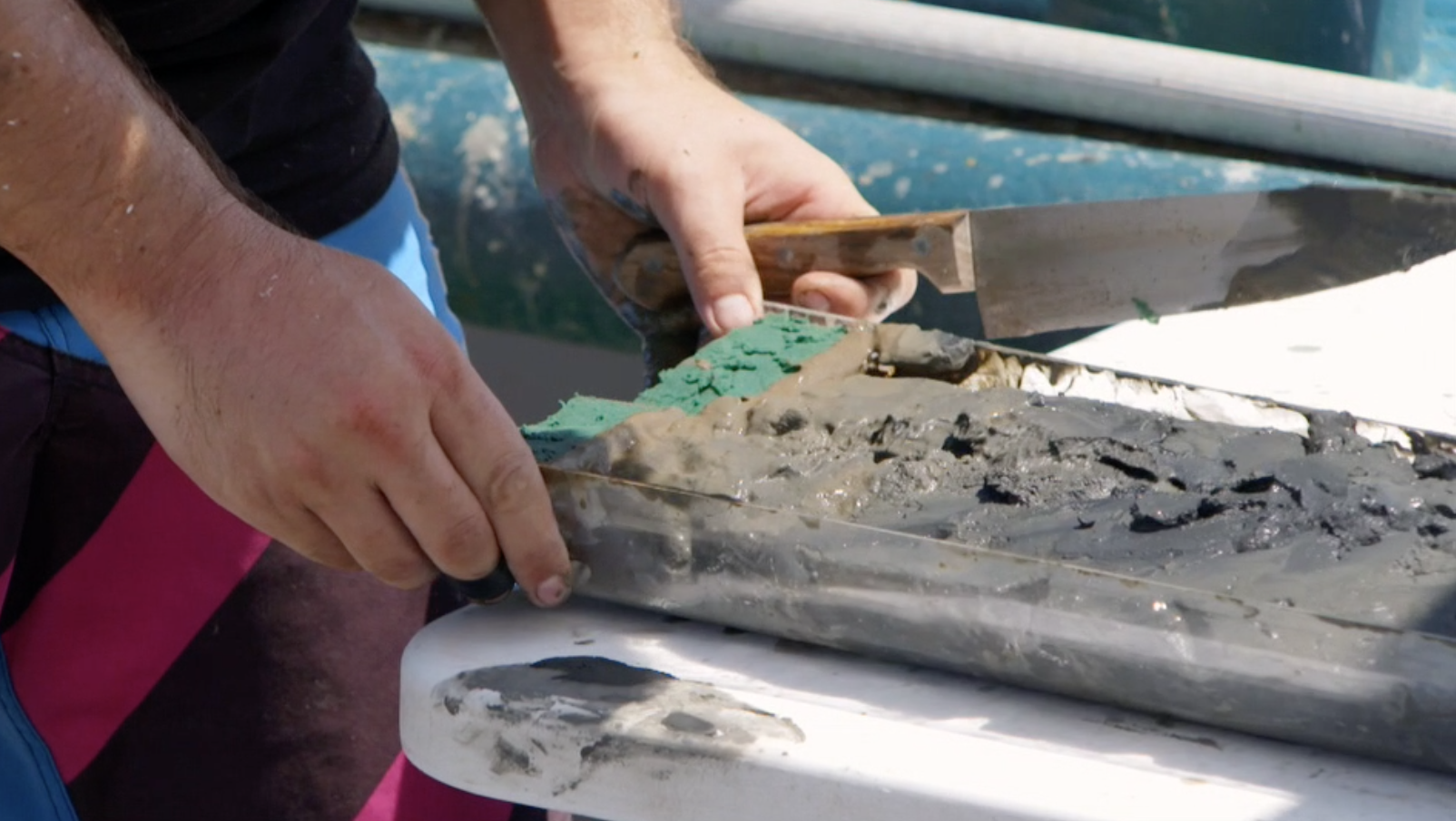 “Our major objective is to see how long contamination persist on the sediments, the main oil-derived compounds that persist, and their potential impact to benthic communities,” said Romero. The areas of the ocean she studies gives insight to the sub-sea oil we never see reaching the surface.

‘Dispatches from the Gulf’ covers the work of three of the twelve Gulf of Mexico Research Initiative consortia, C-IMAGE, RECOVER, and ECOGIG.

Screenings of the documentary may be happening near you. Visit their webpage (dispatchesfromthegulf.com/screenings/) to see the when and where!