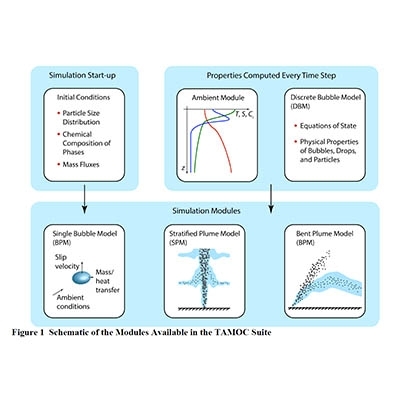 The Texas A&M Oilspill Calculator (TAMOC) is a new, freely available modeling suite for predicting fate and transport of oil and gas released from subsea accidents. The model is coded in Python and Fortran and is freely available from http://github.com/socolofs/tamoc. The model contains general modules for handling ambient water column data, hydrocarbon equations of state, and bubble and droplet dynamics, including particle rise velocity, shape, surface area, and heat and mass transfer rates. Three simulation models are included with the modeling suite. The Single Bubble Model (SBM) tracks the fate of a single bubble or droplet as it rises through the water column, advected by the three-dimensional ambient currents, and undergoing dissolution and heat transfer. For larger scale releases, two different integral plume models are provided. In weak currents, the Stratified Plume Model (SPM) predicts multiple subsurface intrusions; when currents are larger and the plume trajectory is deflected in the downstream direction, the suite applies the Bent Plume Model (BPM), which yields one intrusion layer and tracks separation between the released oil droplets and gas bubbles and the entrained seawater. All modeling components have been thoroughly validated to available laboratory and field data. This paper demonstrates some of the key validation metrics and applies the model to explore the dynamics of the Deepwater Horizon accident. The hot oil and gas released from the wellhead quickly cool to near ambient temperature (within 25 m above the release), and dissolution is generally faster than gas ebullition. Model predictions agree well with observations from 2010, including calculations for the depth of the intrusion layer and the flux of chemical components to the atmosphere.

Remote detection of pelagic Sargassum is often hindered by its…

The role of Mississippi River discharge in offshore phytoplankton blooming…

Satellite images of reflected sunlight have been used to detect…