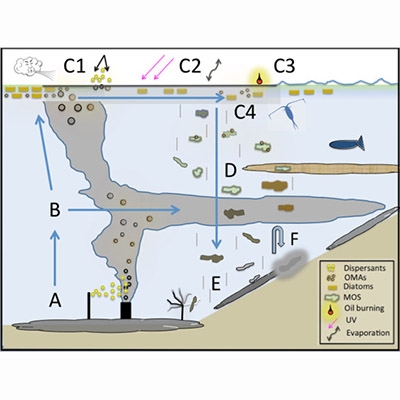 The Deepwater Horizon oil spill was the largest in US history, unprecedented for the depth and volume of oil released, the amount of dispersants applied, and the unexpected, protracted sedimentation of oil-associated marine snow (MOS) to the seafloor. Marine snow formation, incorporation of oil, and subsequent gravitational settling to the seafloor (i.e., MOSSFA: Marine Oil Snow Sedimentation and Flocculent Accumulation) was a significant pathway for the distribution and fate of oil, accounting for as much as 14% of the total oil released. Long residence times of oil on the seafloor will result in prolonged exposure by benthic organisms and economically important fish. Bioaccumulation of hydrocarbons into the food web also has been documented. Major surface processes governing the MOSSFA event included an elevated and extended Mississippi River discharge, which enhanced phytoplankton production and suspended particle concentrations, zooplankton grazing, and enhanced microbial mucus formation. Previous reports indicated that MOS sedimentation also occurred during the Tsesis and Ixtoc-I oil spills; thus, MOSSFA events may occur during future oil spills, particularly since 85% of global deep-water oil exploration sites are adjacent to deltaic systems. We provide a conceptual framework of MOSSFA processes and identify data gaps to help guide current research and to improve our ability to predict MOSSFA events under different environmental conditions. Baseline time-series data and model development are urgently needed for all levels of ecosystems in regions of hydrocarbon extraction to prepare for and respond to future oil spills and to understand the impacts of oil spills on the environment.