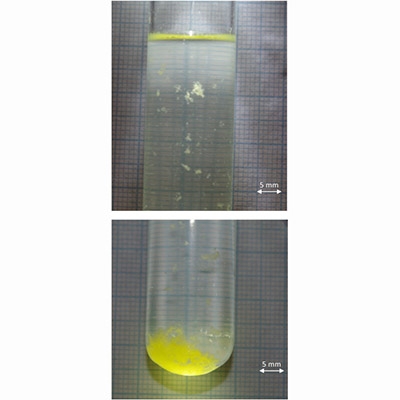 Unusually large amounts of marine snow, including Extracellular Polymeric Substances (EPS), were formed during the 2010 Deepwater Horizon oil spill. The marine snow settled with oil and clay minerals as an oily sludge layer on the deep sea floor. This study tested the hypothesis that the unprecedented amount of chemical dispersants applied during high phytoplankton densities in the Gulf of Mexico induced high EPS formation. Two marine phytoplankton species (Dunaliella tertiolecta and Phaeodactylum tricornutum) produced EPS within days when exposed to the dispersant Corexit 9500. Phytoplankton-associated bacteria were shown to be responsible for the formation. The EPS consisted of proteins and to lesser extent polysaccharides. This study reveals an unexpected consequence of the presence of phytoplankton. This emphasizes the need to test the action of dispersants under realistic field conditions, which may seriously alter the fate of oil in the environment via increased marine snow formation.