ST. PETERSBURG, Fla. (July 28, 2016) – Researchers from the University of South Florida College of Marine Science, along with colleagues representing institutions across the country and internationally, are set to embark on a 40-day research cruise through the Gulf Mexico to gather key data that will provide a more complete understanding of the destructive effects from two significant oil spills. The USF-led research group will study the seas, coastlines and reefs impacted by the 2010 Deepwater Horizon and 1979 Ixtoc oil spills, the two largest submarine blowouts in history.

The team of 13 researchers will board the R/V Weatherbird II on Tuesday, Aug. 3 for the group’s longest trip to date in a six-year plan to study the incidents. 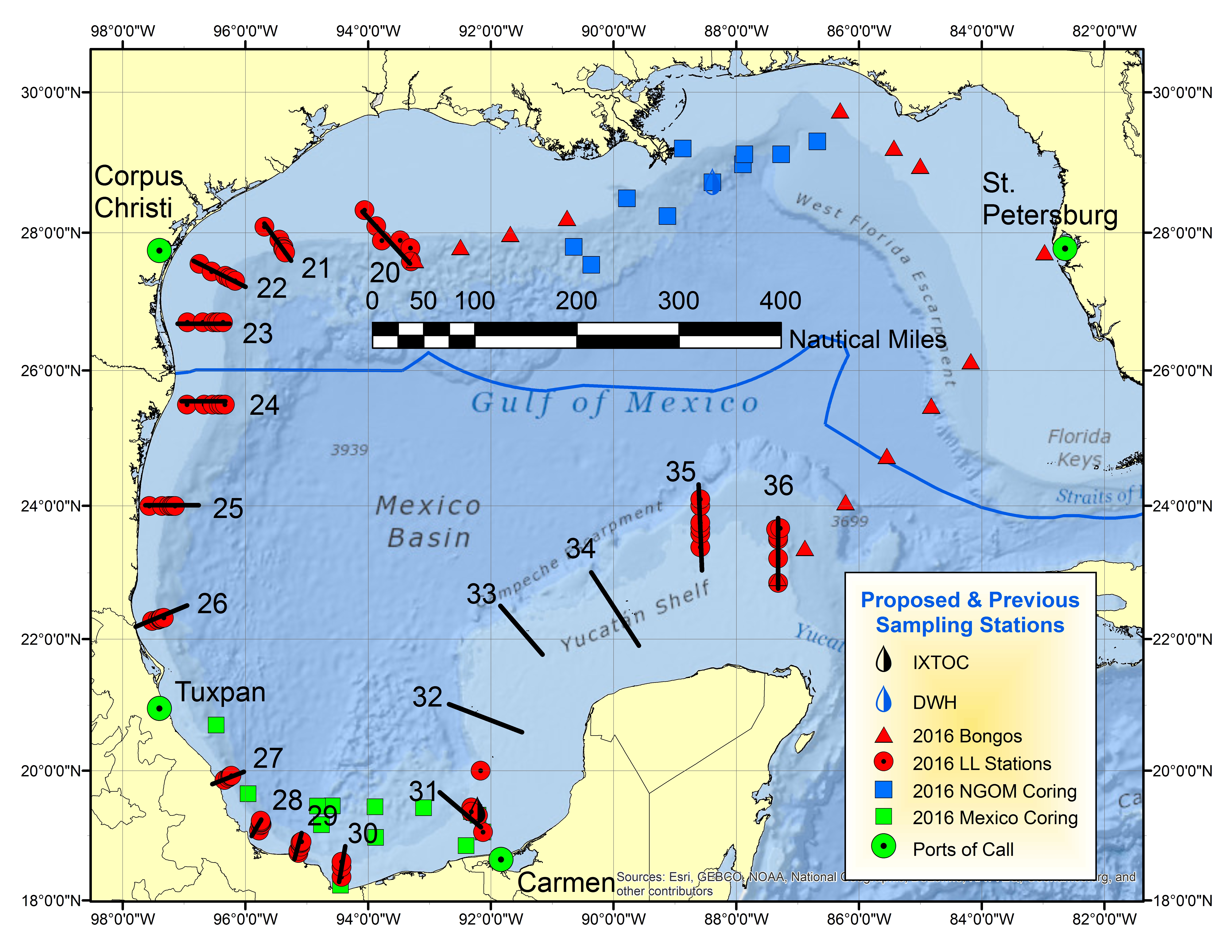 USF is the lead institution for the Center for Integrated Modeling and Analysis of Gulf Ecosystems (C-IMAGE), an international research consortium studying the impacts and processes of oil spills in the Gulf of Mexico. By continuing to study the two massive spills, Deepwater Horizon (210 million gallons) and Ixtoc (130 million gallons), C-IMAGE ultimately hopes to provide powerful new tools and knowledge to response teams, researchers and policy makers in the event of future oil spills.

Researchers on the cruise, being called the “One Gulf Expedition,” will gather important baseline data to help further study how fish populations have been impacted. The scientists will collect fish samples along the Yucatan Peninsula, around the Bay of Campeche and along the Mexico and Texas coasts in search of bottom-dwelling fish – such as red snapper – as well as sediment and water samples.

Dr. Steve Murawski, USF College of Marine Science professor and director of the C-IMAGE consortium, is the expedition’s chief scientist.

“The muscle and liver tissues, bile, blood, and otoliths (fish ear bones) we are collecting with this expedition will contribute to the first complete set of baseline samples from around the Gulf. It enables us to characterize the present condition of the Gulf and such an expedition has never before been conducted,” said Murawski.

In addition to baseline data, the expedition will provide samples for continued research at USF labs to study the physiological response of fish to toxins, how sick fish respond when encountering oil and the recovery of animal life in Gulf sediments following spills.

“We have learned a great deal about the health of the Gulf following the 2010 spill,” Murawski said. “But we can’t stop here. There’s a remarkable potential waiting for us in the southern Gulf as well.”

This trip is particularly unique as there will also be a team of land-based researchers trekking through mangroves and rocky shorelines in the Campeche, Tabasco and Veracruz states of Mexico looking for traces of oil washed ashore during the 1979 Ixtoc oil spill.

“We hope to be able to fully characterize the oil residue still remaining along the Mexican coasts,” said Dr. Patrick Schwing, a geochemist at the USF College of Marine Science and team lead. “We hope to identify the spatial extent, thickness, any lasting impacts, and study the products of natural weathering of this oil. This part of the effort is to provide the larger context of a comparative effort between the Ixtoc and Deepwater Horizon spills. While the coastal settings may not be exactly the same as in Louisiana, the researchers hope this expedition will help forecast what the impacted sites in the northern Gulf may look like in 30 years.”

During the trip, a vessel tracker will give hourly status reports of the R/V Weatherbird’s position. Frequent updates, including photos, will be provided via the C-IMAGE Facebook and Twitter accounts, as well as an expedition blog that will offer a more in-depth look at the research findings.

Since 2011, the Gulf of Mexico Research Initiative (GoMRI) has provided $353 million in research dollars funding consortia – like C-IMAGE – and grants to study spill impacts on coastal, surface, and deep-sea environments, impacts on human health, and properties of oil droplets and dispersants in the ocean. C-IMAGE is one of twelve similar research consortia funded by the Gulf of Mexico Research Initiative. In 2015, USF was awarded $20.2 million to continue C-IMAGE research.