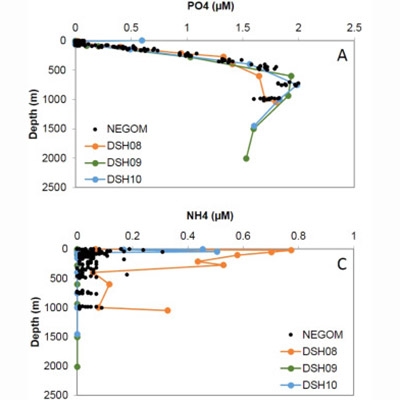 Over 50 years of multiple anthropogenic perturbations, Florida zooplankton stocks of the northeastern Gulf of Mexico declined ten-fold, with increments of mainly dominant toxic dinoflagellate harmful algal blooms (HABs), rather than diatoms, and a shift in loci of nutrient remineralization and oxygen depletion by bacterioplankton, from the sea floor to near surface waters. Yet, lytic bacterial biomass and associated ammonification only increased at most five-fold over the same time period, with consequently little indication of new, expanded “dead zones” of diatom-induced hypoxia. After bacterial lysis of intact cells of these increased HABs, the remaining residues of zooplankton biomass decrements evidently instead exited the water column as malign aerosolized HAB asthma triggers, correlated by co-traveling mercury aerosols, within wind-borne sea sprays. To unravel the causal mechanisms of these inferred decadal food web transitions, a 36-state variable plankton model of algal, bacterial, protozoan, and copepod component communities replicated daily time series of each plankton group’s representatives on the West Florida shelf (WFS) during 1965–2011. At the lower phytoplankton trophic levels, 52% of the ungrazed HAB increments, between 1965–1967 and 2001–2002 before recent oil spills, remained in the water column to kill fishes and fuel bacterioplankton. But, another 48% of the WFS primary production then left the ocean’s surface as a harbinger of increased public health hazards during continuing sea spray exports of salts, HAB toxins, and Hg poisons. Following the Deepwater Horizon petroleum releases in 2010, little additional change of element partition among the altered importance of WFS food web components of the trophic pyramid then pertained between 2001–2002 and 2010–2011, despite when anomalous upwelled nutrient supplies instead favored retrograde benign, oil-tolerant diatoms over the HABs during 2010. Indeed, by 2011 HABs were back, with biomass accumulations equivalent to those found in 2001.

Ref: Walsh, J, J., Lenes, J. M., Darrow, B., Parks, A., Weisberg, R. H. (2016) Impacts of combined overfishing and oil spills on the plankton trophodynamics of the West Florida shelf over the last half century of 1965–2011: A two-dimensional simulation analysis of biotic state transitions, from a zooplankton- to a bacterioplankton-modulated ecosystem. Continental Shelf Research, 116, 54-73.