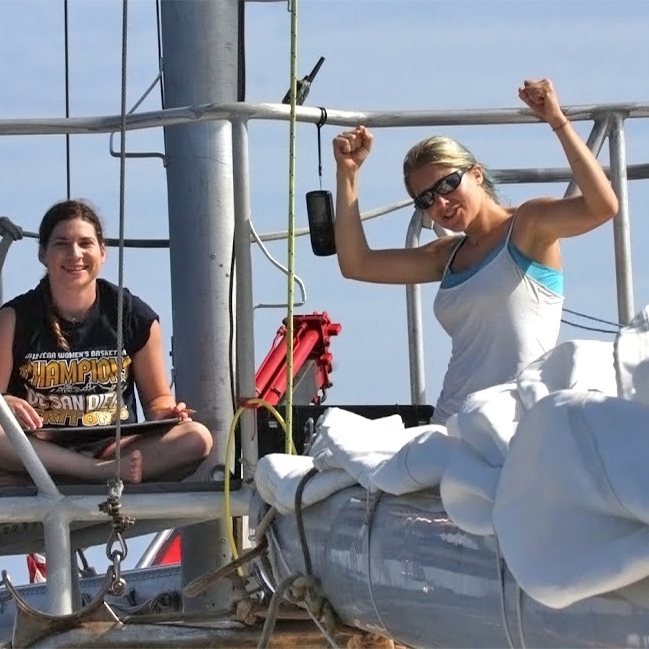 Grad Student Frasier is Learning What Dolphins Can Tell Us

Kait Frasier listens to Gulf marine mammals to estimate how many there are and find out if their numbers are changing after the Deepwater Horizon oil spill. Kait sees dolphins as a good species to study because “everyone can see and understand them, not just scientists.”

Kait, a Ph.D. student at the Scripps Institution of Oceanography at the University of California – San Diego, is a GoMRI Scholar with C-IMAGE. She shares her journey, work, and hopes for the future.

Kait’s journey into dolphin research came as a pleasant surprise. Despite initially wanting to study deep sea worms, she interned with Dr. John Hildebrand in the underwater bioacoustics lab, using sound to locate whales and dolphins. Being a Biology major, she felt “this was way over my head,” but needing a job, she stuck with it. She thought that working with dolphins would be “a touchy-feely sort of science.” However, Kait soon discovered that the science was surprisingly heavily rooted in physics, math, and computing; so, she took more classes and learned programming.

(Click to enlarge) On NOAA’s R/V Gordon Gunter, in the Gulf of Mexico, Kait Frasier dons a survival suit (referred to as a “Gumby Suit”). Researchers have to be able to get into it in under a minute, which takes some practice. (Photo provided by Frasier)

As her role evolved, Kait entered a Ph.D. program in marine mammal bioacoustics, something she “hadn’t even known was ‘a thing’ up until that point” and that “people only do in their dreams.” Not so bad. With this new focus, Kait said that “the combination of the insane beauty of the ocean and the challenges of the research” drew her into the field.