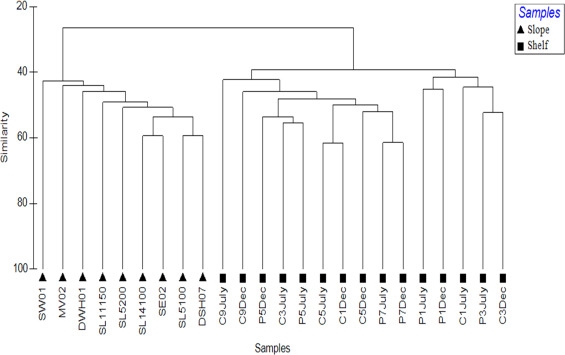 Benthic foraminifera are globally distributed protozoa in the world’s oceans, which have been used as ecological indicators in both current and palaeo oceanography. The ecological properties and distribution of these organisms in various regions of the Gulf of Mexico (GOM) have been evaluated using microscopy; however molecular approaches for these purposes have been limited, especially in deeper regions. The BP Deepwater Horizon oil well failure in the northern Gulf of Mexico highlighted the need to better understand the distribution and abundance of these organisms relative to environmental factors and ecosystem perturbations such as the oil spill. Sediment samples were collected using a Shipek grab along transects on the northwest Florida GOM shelf (18–270 m depth). Clone libraries were developed from PCR amplified 18S rDNA genes for sequence analysis. Analysis of random clones from libraries were used as a proxy for community structure (presence and relative abundance) to document the spatial and temporal dynamics of benthic foraminifera on the Northwest Florida Shelf in the NE GOM shelf. Additional continental slope samples (200–1600 m depth) were obtained by a multicorer and treated in similar fashion. Mean species diversity in this study (H=2.49–3.36), agreed with pre-DWH event estimates, however the dominant agglutinated species in the deep-water samples did not match previous studies. Additionally, the dominant calcareous taxa from this study such as Allogromida sp. and Psammophaga sp., were inconsistent with previous reports. The dominant taxa in both coastal and deep-water sites include Glabratellina sp., Trochammina hadai, and Trochammina sp., and Textularia sagittula and Bathysiphon argenteus as well as members of genera Astrammina, Bolivina, Cibicides and Cibicidoides.