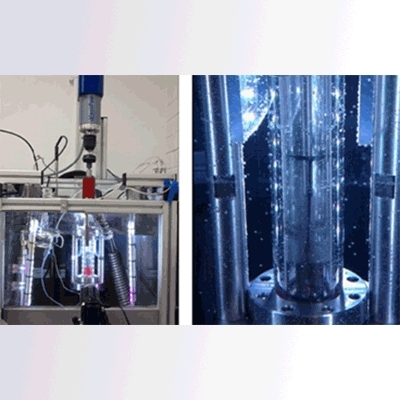 In a recent study published in Chemical Engineering Science from the University of Western Australia (UWA) and University of Miami (UM), C-IMAGE researchers have deployed unique experimental equipment to better understand how crude oil disperses in seawater at high pressures. This is a critical first step to ultimately predict the dispersion and transportation of liquid and gas hydrocarbons through the water column and to better inform both subsea and surface remediation efforts.

This work builds on an initial study by Paris et al. (2012), where estimates of crude oil droplet size are coupled in a hydrodynamic model to predict the effect of chemical dispersion, vertical currents, inertial buoyancy forces, and biodegradation on the vertical and lateral migration of oil droplets through the water column.

This 2015 study has deployed a high-pressure sapphire cell, where crude oil and water were mixed through a magnetically-coupled impeller with methane gas up to 120 times atmospheric pressure. The impeller stirring rates provide access to different turbulence regimes, in order to study the range of conditions that may have been accessed at the Macondo blowout site.

“This is the first time that we’ve been able to visually monitor how droplets break up and coalesce at these extreme subsea conditions,” said Zachary Aman, Associate Professor of Mechanical and Chemical Engineering at UWA and co-investigator in the C-IMAGE II consortium. “These results suggest there is a range of natural turbulence conditions in which crude oil may naturally disperse as small particles, on the order of 3-10 times the width of a human hair.”

“This is a landmark publication on the first measurements of oil droplet size at high pressure and its consequences on oil surfacing from a deep well blowout,” said Claire Paris, Associate Professor of Ocean Sciences at the UM Rosenstiel School. “These empirical results support the message from our initial modeling work, that the use of toxic dispersants at depth should not be a systematic oil spill response.”

These new measurements now suggest that deep water physics and the associated high pressure may create a natural dispersion mechanism that doesn’t require chemical assistance. The prominence of this dispersion mechanism increases with water depth, and may be a primary controlling factor for the deep water oil and gas operations in the Gulf of Mexico.

Shortly after the Deepwater Horizon oil spill, BP committed $500 million over a 10-year period to create a broad, independent research program to be conducted at research institutions primarily in the US Gulf Coast States. Accordingly, the Gulf of Mexico Research Initiative (GoMRI) Research Board has 20 members who are science, public health, and research administration experts. The ultimate goal of the GoMRI is to improve society’s ability to understand, respond to and mitigate the impacts of petroleum pollution and related stressors of the marine and coastal ecosystems, with an emphasis on conditions found in the Gulf of Mexico.

C-IMAGE (the Center for the Integrated Modeling and Analysis of the Gulf Ecosystem) is one of twelve GoMRI-funded consortia conducting research in the Gulf with scientists from 14 institutions and four countries that is dedicated to contributing to the goals of the GoMRI. C-IMAGE’s priority is to integrate field and laboratory studies with state of the art modeling to understand historical oil spills in the Gulf and to be better prepared to predict impacts of future spills.

This work has been featured in many other media outlets: