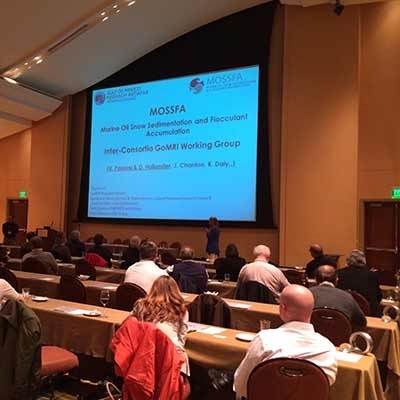 High accumulation rates of sinking, oil-associated particles at the seafloor after the DwH accident were unexpected. This pathway was not considered in response strategies and is not included in the oil budget calculator for the DwH spill. MOSSFA (Marine Oil Snow Sedimentation and Flocculent Accumulation) is a GoMRI inter-consortium working group, investigating the processes leading to the formation of rapidly sinking, oil- associated marine snow, its accumulation at the seafloor, and its fate and impact within pelagic and benthic ecosystems. At this Town Hall meeting, we will report on the summary findings that emerged from the inaugural MOSSFA meeting held October 2013.

Mitigation techniques for surfacing oil included the opening of the floodgates of the Mississippi River and diversionary channels to purge contaminants from the coast, the wide spread application of dispersants to reduce oil droplet size and increase oil solubility, and oil burning which resulted in the formation of pyrogenic PAHs and soot. Collectively, these tools may have resulted in many unintended consequences, including the intensification of MOSSFA processes, leading to the rapid formation, sedimentation and accumulation at the seafloor of flocculent material containing significant amounts of hydrocarbons of petrogenic and pyrogenic origins and labile biomass from diverse photo- and heterotrophic communities.  Cross-shelf and lateral particle transport appears to have intensified MOSSFA processes and led to an increase in the spatial “footprint” of sedimentary oil deposition. Budgets estimate that between 3-25% of the total liquid oil released during the DwH event was deposited in the sedimentary reservoir, requiring a significant reappraisal of the DwH oil budget calculation. A continued flux of oil to the sediments would result in long-term contamination of benthic habitats and of lower and upper trophic-level benthic-resident organisms. This proposed mechanism provides a pathway for the uptake and continued metabolism of toxic and carcinogenic petroleum hydrocarbons into economically and recreational fish species.

The Town Hall discussion panel will focus on (1) evaluating the role of response strategies to surfacing oil on the intensification of MOSSFA-based processes, (2) incorporation of oiled-sediments in the oil-budget calculation, and (3) the long-term contamination of benthic habitats and its impact on important benthic dependent fish species. Inclusion of these perspectives in association with future deep-sea petroleum blowouts may lead to a paradigm shift in how surfacing oil mitigation techniques are applied, how they influence the oil-budget calculations, and how biological impact and injury assessment are evaluated.