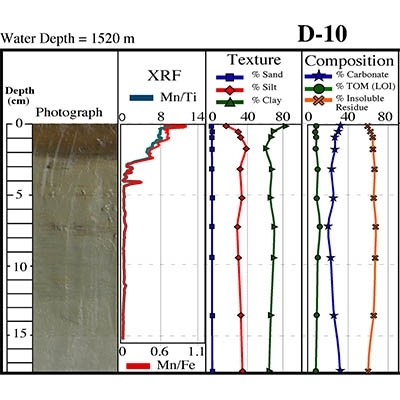 The objective of this study was to investigate the impacts of the Deepwater Horizon (DWH) oil discharge at the seafloor as recorded in bottom sediments of the DeSoto Canyon region in the northeastern Gulf of Mexico. Through a close coupling of sedimentological, geochemical, and biological approaches, multiple independent lines of evidence from 11 sites sampled in November/December 2010 revealed that the upper ~1 cm depth interval is distinct from underlying sediments and results indicate that particles originated at the sea surface. Consistent dissimilarities in grain size over the surficial ~1 cm of sediments correspond to excess 234Th depths, which indicates a lack of vertical mixing (bioturbation), suggesting the entire layer was deposited within a 4–5 month period. Further, a time series from four deep-sea sites sampled up to three additional times over the following two years revealed that excess234Th depths, accumulation rates, and 234Th inventories decreased rapidly, within a few to several months after initial coring. The interpretation of a rapid sedimentation pulse is corroborated by stratification in solid phase Mn, which is linked to diagenesis and redox change, and the dramatic decrease in benthic formanifera density that was recorded in surficial sediments. Results are consistent with a brief depositional pulse that was also reported in previous studies of sediments, and marine snow formation in surface waters closer to the wellhead during the summer and fall of 2010. Although sediment input from the Mississippi River and advective transport may influence sedimentation on the seafloor in the DeSoto Canyon region, we conclude based on multidisciplinary evidence that the sedimentation pulse in late 2010 is the product of marine snow formation and is likely linked to the DWH discharge.