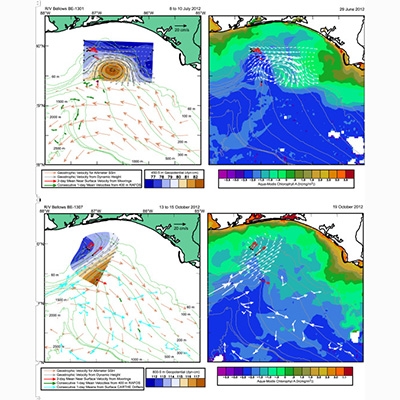 Observations of currents, temperature, sea-surface height, sea-surface temperature and ocean color, derived from moorings, surface and deep drifters, hydrographic surveys, and satellites, are used to characterize shelf-slope exchange events near the apex of the De Soto Canyon in the northeast Gulf of Mexico. During the winter of 2012–2013, shelf-break time series showed a number of events where cold shelf water extruded over the slope. These events were largely consistent with slope eddies of both signs influencing shelf break currents. Larger-scale circulations, derived from the Loop Current and a separating Loop Current eddy, strongly influenced circulation over the De Soto slope during summer 2012, with flow patterns consistent with potential vorticity conservation over shoaling topography. Statistical investigation into shelf-slope exchange using large numbers of surface drifters indicated that export from the shelf is larger than vice-versa, and is more uniformly distributed along the shelf break. Import onto the shelf appears to favor a region just east of the Mississippi Delta, which is also consistent with the observed onshore transport of surface oil from the Deepwater Horizon disaster.