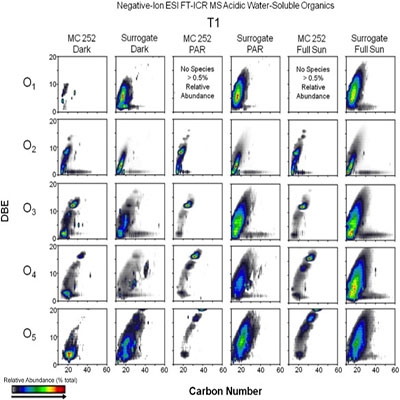 To determine effects of photochemical weathering of petroleum, surrogate and Macondo (MC252) crude oils were exposed to solar radiation during the formation of Water Accommodated Fractions (WAFs) in sterile seawater. Samples were incubated in either unfiltered sunlight, with ultraviolet radiation blocked (Photosynthetically Active Radiation [PAR] only), or in darkness. WAFs were collected at two time points over the course of a week. Fourier Transform Ion Cyclotron Resonance Mass Spectrometry (FT-ICR MS) analyses of water soluble species formed during exposure to sunlight were compared for the different treatments. Photochemical alterations resulted in differences in compound class distributions. In general, surrogate oil was photo-oxidized across a wider carbon number range compared to MC252. While photochemical differences were observed between MC252 and surrogate oils, microbial production in seawater responded similarly to both WAFs from both types of oils with the majority of the inhibition resulting from oil exposure to visible light.