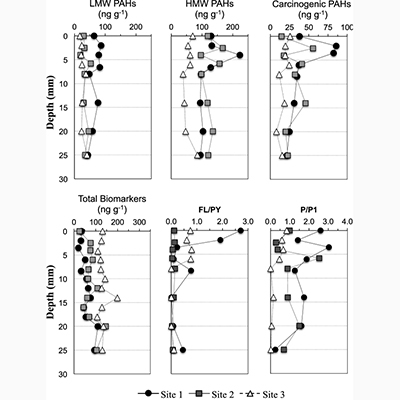 On 23 July 2013, a marine gas rig (Hercules 265) ignited in the northern Gulf of Mexico. The rig burned out of control for 2 days before being extinguished. We conducted a rapid-response sampling campaign near Hercules 265 after the fire to ascertain if sediments and fishes were polluted above earlier baseline levels. A surface drifter study confirmed that surface ocean water flowed to the southeast of the Hercules site, while the atmospheric plume generated by the blowout was in eastward direction. Sediment cores were collected to the SE of the rig at a distance of ∼0.2, 8, and 18 km using a multicorer, and demersal fishes were collected from ∼0.2 to 8 km SE of the rig using a longline (508 hooks). Recently deposited sediments document that only high molecular weight (HMW) polycyclic aromatic hydrocarbon (PAH) concentrations decreased with increasing distance from the rig suggesting higher pyrogenic inputs associated with the blowout. A similar trend was observed in the foraminifera Haynesina germanica, an indicator species of pollution. In red snapper bile, only HMW PAH metabolites increased in 2013 nearly double those from 2012. Both surface sediments and fish bile analyses suggest that, in the aftermath of the blowout, increased concentration of pyrogenically derived hydrocarbons was transported and deposited in the environment. This study further emphasizes the need for an ocean observing system and coordinated rapid-response efforts from an array of scientific disciplines to effectively assess environmental impacts resulting from accidental releases of oil contaminants.