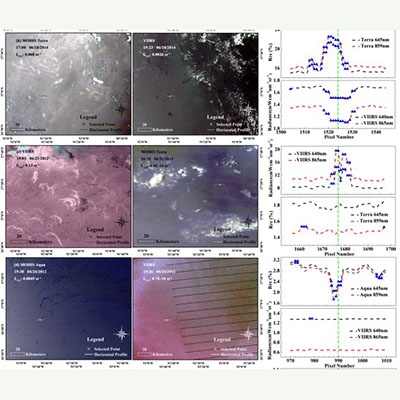 Natural oil slicks in the western Gulf of Mexico are used to determine the sun glint threshold required for optical remote sensing of oil films. The threshold is determined using the same-day image pairs collected by Moderate Resolution Imaging Spectroradiometer (MODIS) Terra (MODIST), MODIS Aqua (MODISA), and Visible Infrared Imaging Radiometer Suite (VIIRS) (N = 2297 images) over the same oil slick locations where at least one of the sensors captures the oil slicks. For each sensor, statistics of sun glint strengths, represented by the normalized glint reflectance (LGN, sr−1), when oil slicks can and cannot be observed are generated. The LGN threshold for oil film detections is determined to be 10−5–10−6 sr−1 for MODIST and MODISA, and 10−6–10−7 sr−1 for VIIRS. Below these thresholds, no oil films can be detected, while above these thresholds, oil films can always be detected except near the critical-angle zone where oil slicks reverse their contrast against the background water.