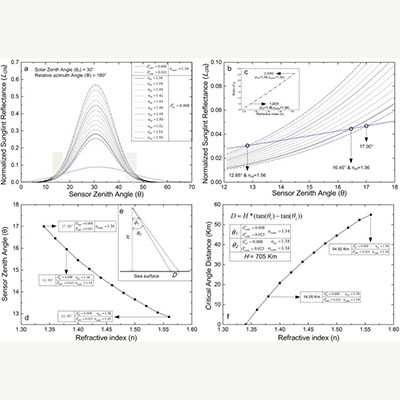 It has long been observed that oil slicks under sunglint can reverse their optical contrast against nearby oil-free seawater. Such a phenomenon has been described through both empirical statistical analysis of the sunglint strength and modeled theoretically using a critical angle concept. The critical angle, in this model, is the angle at which the image pixels show no or negligible contrast between oiled and nonoiled seawater. Pixels away from this critical angle show either positive or negative contrast from the oil-free pixels. Although this concept has been fully demonstrated in the published literature, its calculation needs to be further refined to take into account: (1) the different refractive indices of oil slicks (from natural seeps) and seawater and (2) atmospheric effects in the sensor-measured radiance. Using measurements from the Moderate Resolution Imaging Spectroradiometer (MODIS) over oil films in the Gulf of Mexico, we show improvement in the modeled and MODIS-derived reflectance over oil slicks originated from natural seeps after incorporating these two factors in the model. Specifically, agreement between modeled and measured sunglint reflectance is found for both negative and positive-contrasting oil slicks. These results indicate that surface roughness and reflectance from oil films can be estimated given any solar/viewing geometry and surface wind. Further, this model might be used to correct the sunglint effect on thick oil under similar illumination conditions. Once proven possible, it may allow existing laboratory-based models, which estimate oil thickness after such corrections, to be applied to remote sensing imagery.