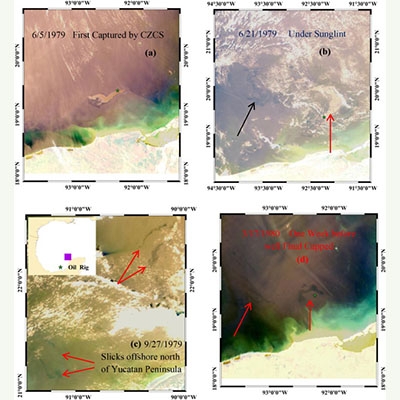 The Ixtoc-I oil spill occurred in 1979 in shallow waters (50 m) of the Bay of Campeche, Mexico. Although it is known that a large portion of the released oil from this second largest accidental marine oil spill in history reached the surface, to date there has been no attempt to document the surface footprint and trajectory of the released oil. Our study attempts to fill this knowledge gap using remote sensing data collected by Landsat/MSS and CZCS. Both showed the same general patterns of oil trajectory to the northwest and north, nearly parallel to the coastline of the western Gulf of Mexico (GoM) with possible oil landing on Mexican and Texas beaches. Field observations at selected beaches and islands along the coast of the western and southern GoM during and after the spill confirmed these satellite-based findings, which were also used to help in planning a recent field campaign to collect sediment samples in the southern GoM.