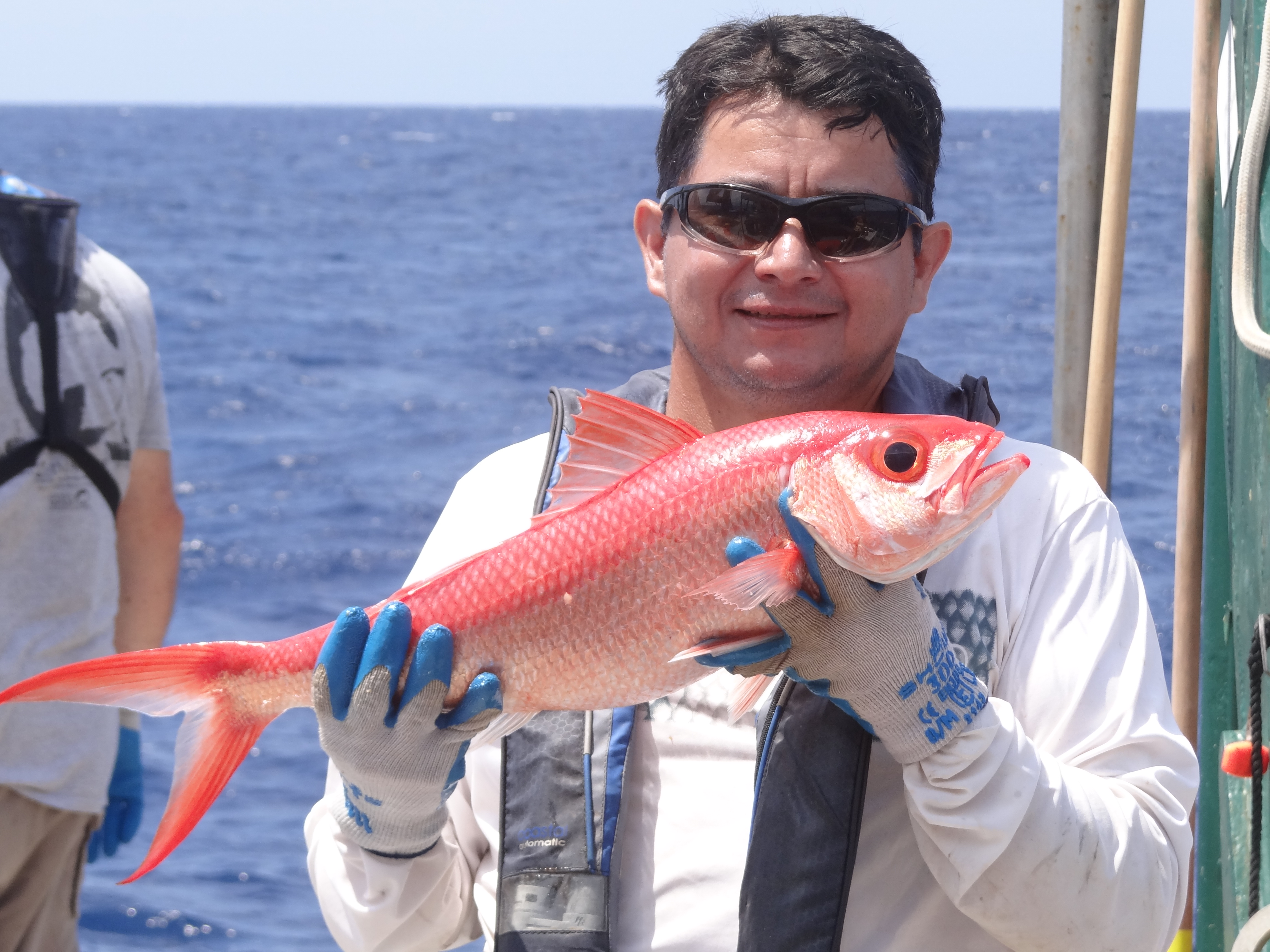 I am part of the ecological modelling team of C-IMAGE. More specifically, I am working on an Atlantis model for the southern Gulf of Mexico. During the first leg of the 2017 One Gulf cruise I helped setting and recovering the long line and also served as a translator.

This cruise visited a part of the Gulf of Mexico where I had never been before. Before the cruise I was looking forward to seeing the area and learning about the environmental conditions and the fish species that occur there and how they compare to other regions. I was aware that the Loop Current current flows through the area bringing in water from the Caribbean Sea. So, I expected that we would catch some fish species from the Caribbean region in addition to those we had seen in other parts of the Gulf. I also discussed with other researchers the fact that maps showed a narrow continental shelf and we were concerned that setting the fishing gear at a specific depth would be more challenging than in other cruises. Nevertheless, I was really excited to be part of the expedition and complete the sampling work across the entire gulf. I was also excited to meet our Cuban colleagues and learn about their work and their experiences.

The sampling work on this cruise started on Education Day, when 21 Cuban graduate students joined the scientific party (13 researchers) and the seven members of the R/V Weatherbird II crew. Students were assigned to groups to rotate through and experience the different sampling activities we are conducting on this cruise: sediment multicore, fishing long line, water column CTD and plankton bongo net. My workstation for this day was the CTD and I explained the setup and sampling procedure. The students asked several questions about the CTD, as well as other equipment (ADCP, echosounder and navigation) on the vessel. They also shared their previous fieldwork experiences. It was very refreshing and encouraging to see the interest and excitement shown by these young scientists. 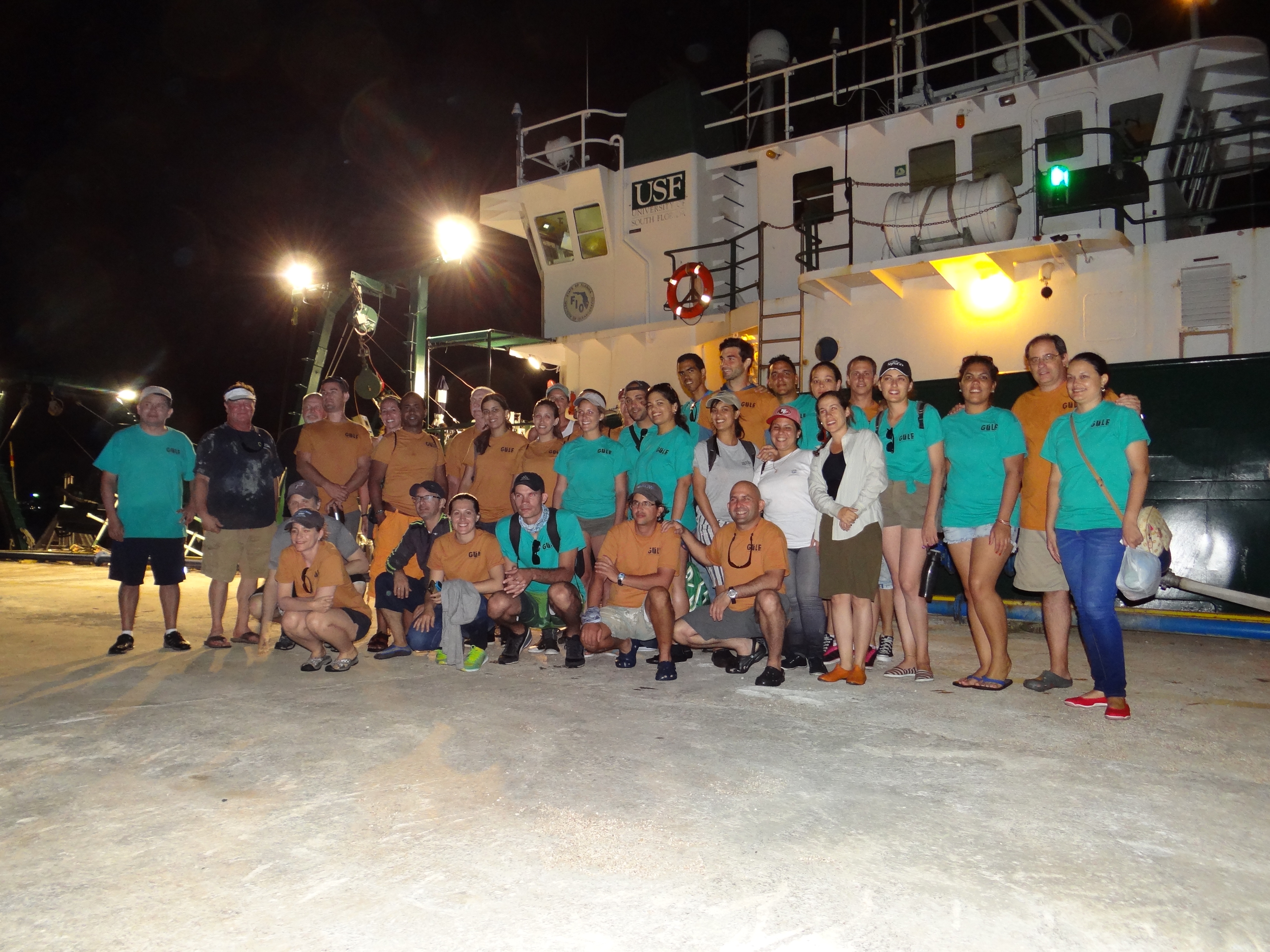 Sampling work after Education Day seemed to go really fast compared to other cruises. Perhaps it was because I only had four more work days before getting off the ship. The daily fishing operation, however, was different on this cruise because the long line kept getting caught on the bottom and recovering the fishing gear took longer than usual. The long line snapped or had to be cut several times and we either lost or had to re-tie more hooks than previous cruises. The number of fish seemed to be lower than in other cruises and the species composition was different. East of Mariel we caught more pelagic species (sharks and even a chimera!) and to the west we caught more reef species like Coney and groupers. It was surprising not to catch any tile fish. I am curious to learn what fish species they catch on the next leg of the cruise, which will go further west and closer to the Caribbean.

Although I was aware of the Loop Current flowing through the area, it was surprising to see the intensity of the current so close to shore. The interaction of the current with the bottom topography close to shore seemed to create some turbulence and we noticed some swirling at the surface in some locations. It is probable that this turbulence and the bottom topography contributed to the higher rate of entanglement of our sampling gear. We even lost a Shipek sediment grab!

Due to the narrow continental shelf we were close to shore and could see land during most of the sampling work. We encountered a few commercial fishing boats but also saw fishermen setting out to sea on small row boats and floats, particularly in the areas close to the ports of Havana and Mariel. While it was amazing to see fishermen brave the sea without powered boats, I realize they probably just continue with a tradition that dates several hundred years in this area.

I am grateful for the opportunity to participate in this cruise and meet the Cuban colleagues. I hope that the Gulf of Mexico collaborative research continues so we can get a better understanding of the shared basin to make informed management decisions.

Images courtesy of the C-IMAGE consortium and The Geography Lady.