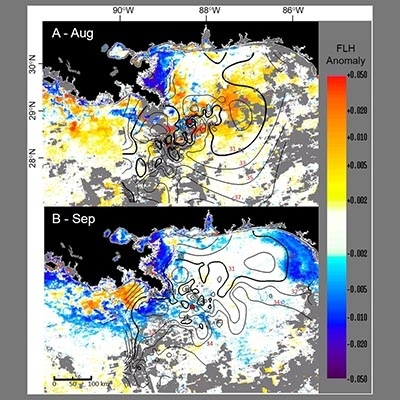 A phytoplankton bloom covering an area > 11,000 km2 has been reported in the northeastern Gulf of Mexico east of the Mississippi River Delta in August 2010 (30°–28° N, 90°–86° W) based on NASA Moderate Resolution Imaging Spectrometer (MODIS) chlorophyll fluorescence line height (FLH) images. The bloom appeared to be anomalous relative to a historical monthly chlorophyll FLH mean (August 2002 to 2010), and was attributed by others to the Deepwater Horizon (DWH) oil spill accident. Here we tested an alternative hypothesis that the eastward dispersal of the Mississippi River plume entrained in wind-driven currents contributed to the development of this phytoplankton bloom. We examined Mississippi River discharge and nutrient records, ship-based surface salinity data, and the time-series of MODIS ocean color and FLH images. Wind measurements from buoys showed winds > 6 m s− 1 first in a southerly (northward) direction August 8–10, and then in a northerly (southward) direction until August 26. Results from the American Seas-Navy Coastal Ocean Model (AmSeas-NCOM) show how coastal water was advected in wind-driven currents into the area of the northeastern Gulf of Mexico where the bloom was documented. Between July 9 and September 8, 2010, the discharge of the Mississippi River exceeded the 20-year mean. During this time, the northeastern Gulf received an estimated excess volume of approximately 8.3 × 109 m3 relative to the 20-year mean. Together with findings from a particle trajectory model, we conclude that nutrients and other materials (e.g., sediments) from the excessive discharge of the Mississippi River and adjacent marshes and wind-driven currents likely contributed to the anomalous bloom observed during August 2010 and to the anomalously high organic matter sedimentation rates observed in the northeastern Gulf of Mexico in the aftermath of the Deepwater Horizon oil spill.