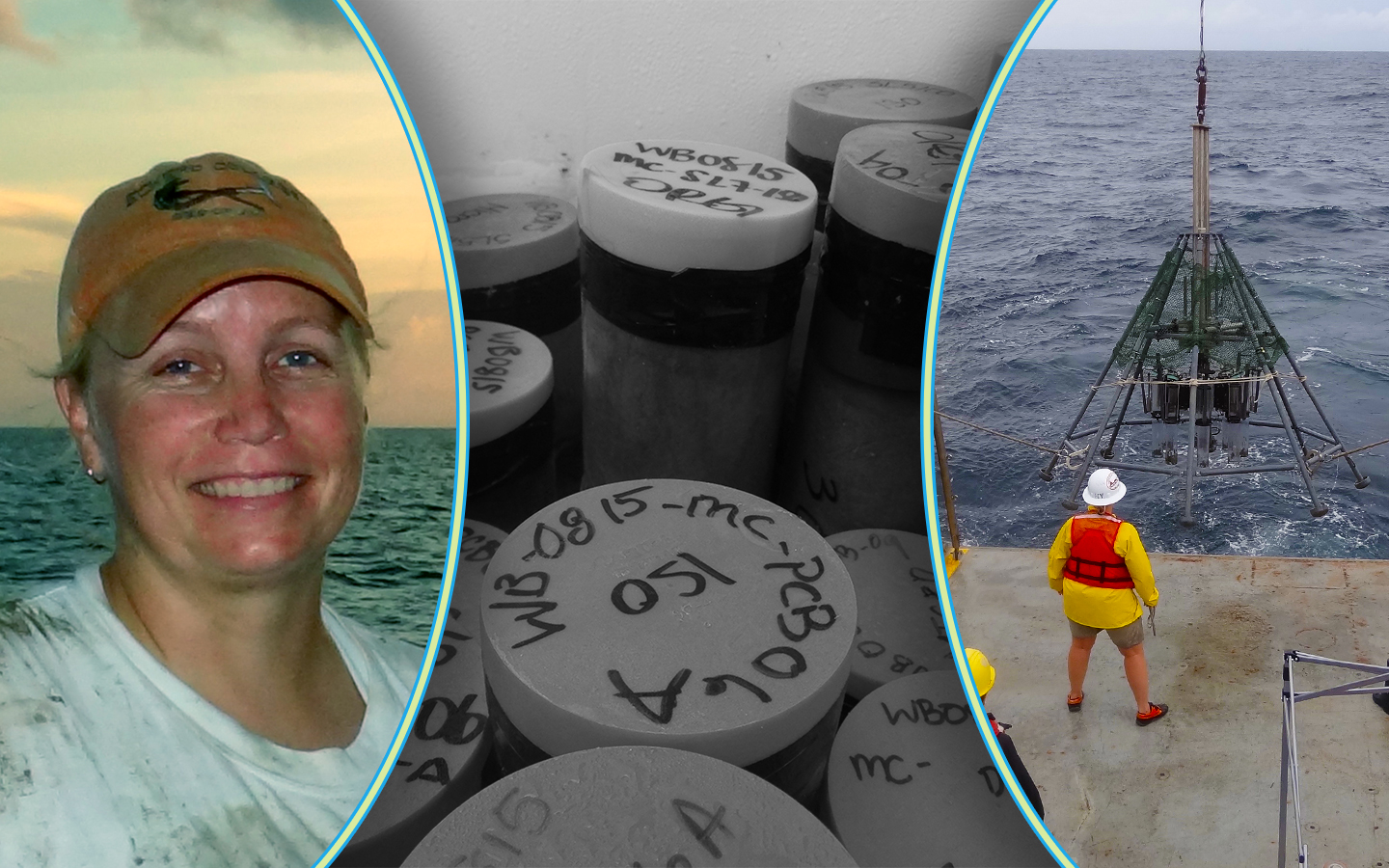 Many of the Students of the Month have been involved in their research for several years, but few have been involved from Gulf spill through recovery. Bekka Larson, a PhD student at the University of South Florida-College of Marine Science, has studied the sediment of the Gulf from the months following the spill in 2010 through today. It is Bekka’s persistence and dedication to understanding the Gulf’s recovery which makes her our Student of the Month for February 2017.

Bekka started her work with sediments and oil spills as a research technician with Dr. Gregg Brooks at Eckerd College Department of Marine Science, and managed the collection of critical cores during the Deepwater Horizon (DwH) response. Her research uses high-resolution core sampling to analyze how the seafloor environment changes after major events like oil spills. Sediments act as history books for the Gulf’s past, and Bekka is turning the page of our understanding of the Gulf.

In 1997, I came to Florida from Minnesota to attend Eckerd College as a Marine Science student, and graduated in 2001 with a Bachelor of Science degree in Marine Science concentrating in Geology.  Following graduation, I took a position as a research technician with Dr. Gregg Brooks at Eckerd College Department of Marine Science with a primary focus on coastal sedimentology in the Gulf of Mexico and Caribbean.  This included the addition of a short-lived radioisotope laboratory in 2005, which provided me the opportunity to learn, manage, and perform research utilizing age dating of sediment cores over the past ~100 years.  Much of our work includes determining the natural variability in sedimentation to identify deviations in the sedimentary record associated with anthropogenic activities.

In 2011, I received my Masters of Science from the University of South Florida College of Marine Science (USF/CMS) under the advisorship of Dr. Albert Hine working on projects funded by Dr. Brooks at Eckerd College investigating the natural sedimentation patterns in coastal salt ponds in the U.S. Virgin Islands.  Following my Masters I began the pursuit of my PhD at USF-College of Marine Science under the advisorship of Dr. Ben Flower.

I became involved with the DwH oil spill research with Ben Flower and Gregg Brooks beginning in August 2010 and have continued with Gregg Brooks and Dr. David Hollander who became my PhD advisor when Ben passed away in 2012.

My research focuses on the sedimentological impact of oil spills in the deep-sea benthos.  This study is specific to the detection of potential changes in sedimentation patterns following two oil spills separated by 35+ years: the Deepwater Horizon (DwH) blowout in the northeastern Gulf of Mexico (NEGoM), and Ixtoc I blowout in the southwest Gulf of Mexico (SGoM). Comparing the sedimentation records of both of these spills requires high-resolution sampling to determine deposition, and preservation in sediment layers.

We are investigating how sedimentation associated with oil spill events such as the DwH and Ixtoc I blowouts compare to the natural or baseline sedimentation patterns and rates throughout the Gulf of Mexico.  Through the extensive Gulf-wide sediment sampling (US, Mexico, and Cuba) we continue to further our understanding of the sedimentary distribution patterns and how they have changed over the past ~100 years from natural and anthropogenic activities.  This work will provide a sedimentary baseline for future comparisons to sedimentation processes associated with anthropogenic and natural events, and will also be utilized to further define the link between sedimentary parameters to benthic ecology, such as benthic biota, fisheries, etc.

What initially interested you in working at Eckerd with the Brooks lab? 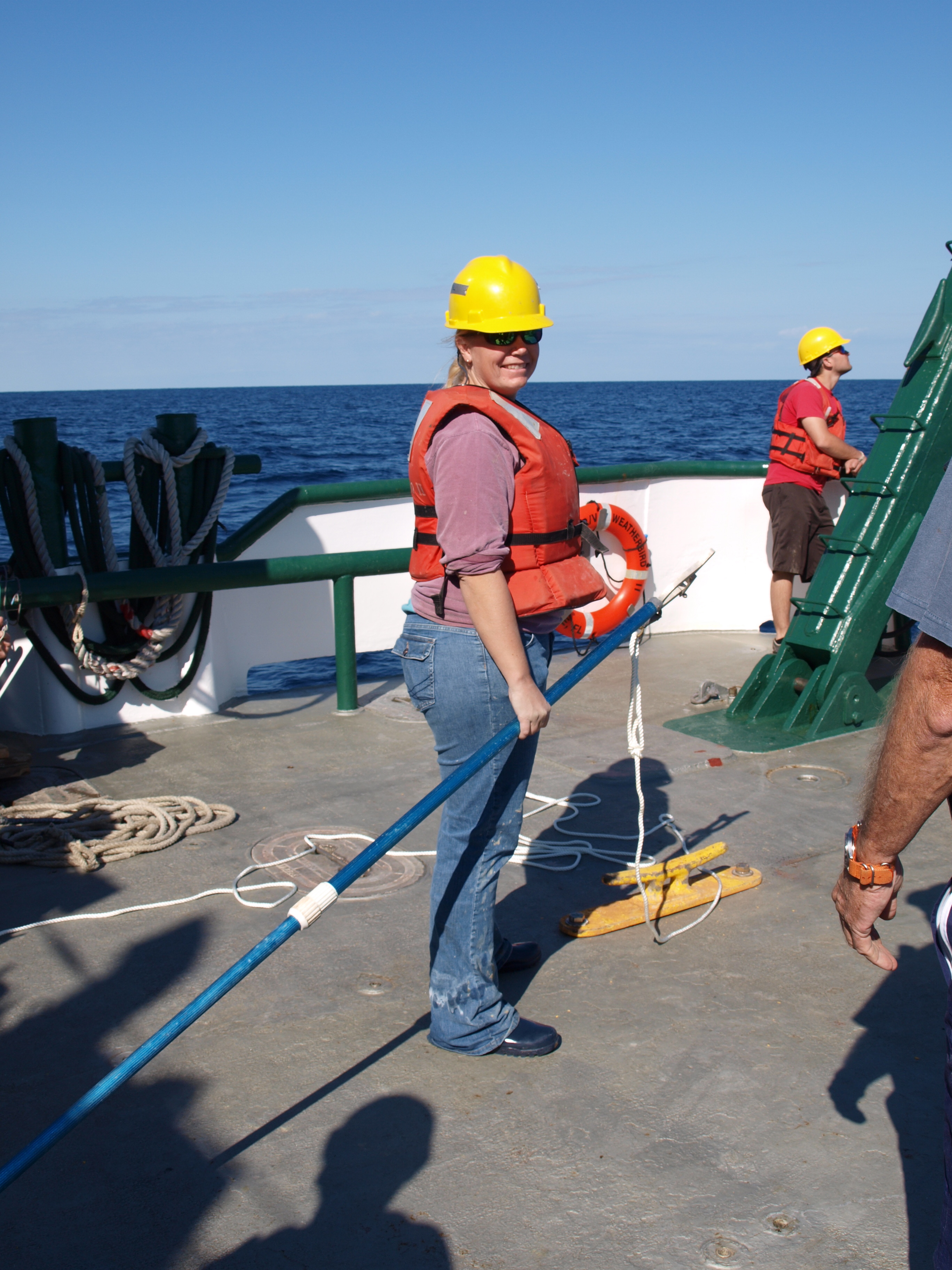 What interested me and continues to interest me in working at Eckerd College with Gregg Brooks is the variety of fieldwork, lab work, desk work, and interaction/introduction of undergraduate students to the research we perform.  I enjoy the applied nature of our research as it increases our scientific knowledge but most often has a practical purpose/outcome.  I also appreciate that I have performed research in a variety of venues (academic, government, private industry) and that I am able to pursue many different opportunities for research… sometimes too many! This includes participation on research cruises and fieldwork in the U.S. and the Caribbean, most recently a new program with Cuban colleagues. I have also had many opportunities to meet and work with high quality scientists from around the U.S. and the world on interdisciplinary projects.

This month I am working on publications of our research.  This includes a publication with a focus on the advances in short-lived radioisotope geochronology that evolved from the oil spill research. These advances accurately analyze small sediment samples to provide higher-temporal resolution (month to annual) age dating to link changes in the sedimentary record to events such as the DwH and Ixtoc I blowouts.  I am also working on a publication describing sedimentological changes using a time-series of 4 sites collected annually over the 6 years following the DwH blowout and the sedimentation pulse associated with the MOSSFA (Marine Oil Snow Sedimentation and Flocculent Accumulation). 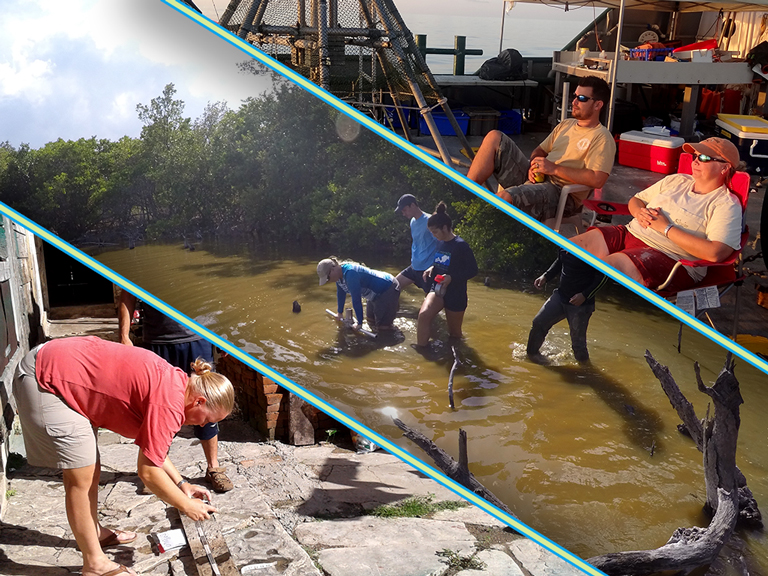 I had the opportunity to be involved in the oil spill research from the beginning, from initial response research in 2010, to discoveries in 2011-2017 and signs of recovery in 2014-2017, and it is amazing what little we knew, how well we guessed on how we should approach studying this event and how much more we know today than we did when we started.  The open discussions that I have been a part of on the science being performed and how it should be tested and adapted for studying these types of events in a very interdisciplinary way have been enlightening.  The rapid response nature of the science performed for the DwH blowout has forced the evolution of what is the most appropriate science rather than a designed, well-planned study with pre-conceived notions of how do you study an oil spill such as the DwH blowout.

Why do you study sediments? What inspires you?

To get dirty…. Good Beer and a Cigar!