This vehicle was developed as a tool for reef fish abundance estimates as well as benthic habitat assessment via a NOAA-funded grant. Because it is non-lethal and towed above the bottom, C-BASS is especially useful in untrawlable habitats (e.g. marine reserves and/or reefs) where many economically important fishes – such as groupers and snappers – tend to reside.  This platform can also be towed at relatively fast speeds (3.5 to 4.0 knots) which allows for large tracts of area to be covered in a short amount of time. Though the main purpose of the C-BASS platform is to facilitate population estimates of reef fishes, this system will also be used to asses habitat type, identify benthic cover (e.g. gorgonians, sponges) and has been successfully equipped with an acoustic receiver to collect data on acoustically tagged fishes. 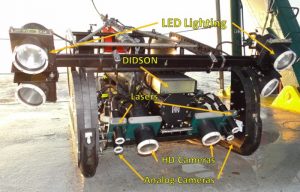 C-BASS stands for Camera-Based Assessment Survey System.  It has been designed to be towed behind a research vessel at an altitude of 2-4 meters above the seafloor at a speeds around 1.8 m/s. C-BASS is nominally equipped with 6 video cameras; typically four cameras (two low resolution cameras and two HD) face forward at a slight downward angle with two more low resolution cameras angled to the port and starboard of the tow body.  One of the HD cameras is also able to be adjusted to face backwards or upwards if needed. The two forward low resolution cameras are configured for stereo allowing for sizing of objects while the HD cameras provide added resolution to facilitate reef fish species identification. 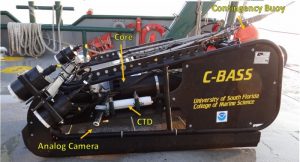 The system is also equipped with a suite of scientific and performance sensors allowing for continuous measurements of turbidity, chlorophyll, temperature, salinity, depth, altitude, and attitude as C-BASS is towed.  Two lasers have been added above the forward-facing analog cameras to assist in sizing and field of view estimations.  An onboard computer is used to monitor all cameras and sensors.  All data are stored on the tow body while sensor data and limited video is sent to the user at the surface. 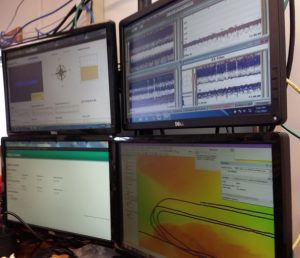 During deployments, the user monitors C-BASS performance via a web-browser based interface loaded from the tow body to the shipboard computer (right – top, left screen) via a DSL modem.  This allows researchers to safely fly C-BASS by displaying live video feed, continuous measurements of the tow body’s altitude over the bottom, depth, and overall system performance.  The user can select any one of the low resolution video cameras to monitor continuously in one browser window while monitoring periodic still images from all six cameras in another window. Concurrently, shipboard sonar (EK-60) is used to view any oncoming
depth variations and obstructions (right – top, right screen), such as reefs or boulders, so that C-BASS can be adjusted accordingly.

Communications and power supplied from the vessel to the towbody through the winch, allowing for continuous tows of up to 12 hours, limited only by the current onboard storage capacity.  All video streams and tow body sensor data are logged and databased on the tow body while all shipboard data streams are databased on the topside computer.

A forward-facing sonar (DIDSON) is also in the process of being integrated into the camera system.  This is anticipated to be useful in estimating the proportion of fishes that may be moving in response to C-BASS further ahead of what the cameras can “see” (approx. 12 meters in front of the system).

This grant is funded by the National Fish and Wildlife Foundation (NFWF) via the Florida Gulf Environmental Benefit Fund Restoration Strategy.

For more information, please visit the project page here. The development and initial implementation of the C-BASS was funded previously (2012-2014) by NOAA/NMFS.