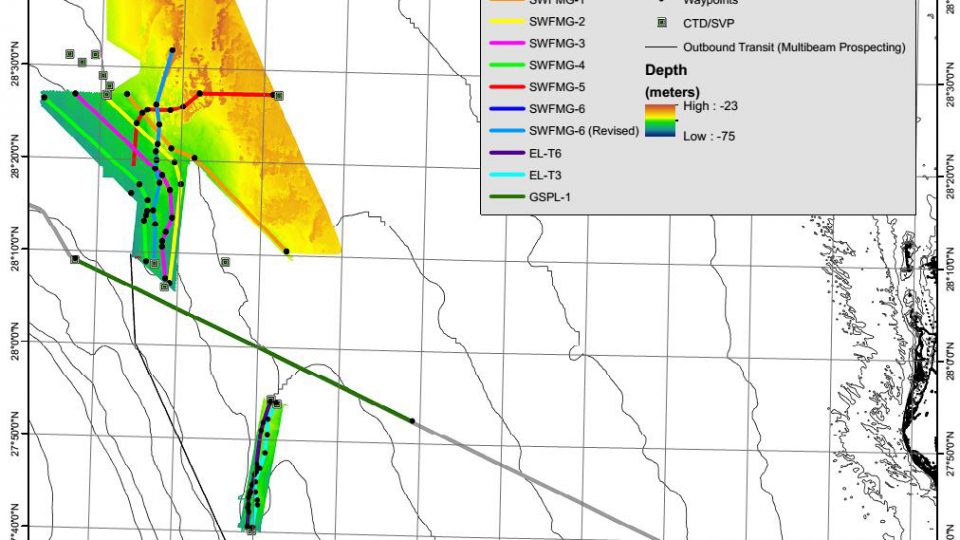 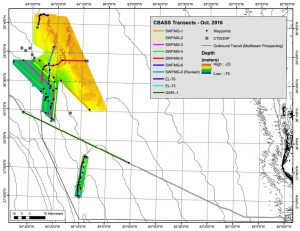 The primary objectives for this cruise were to collect video imagery of previously mapped areas in three locations: the Florida Middle Grounds, the Elbow and the Gulfstream Pipeline. The ship departed at 18:25 UTC on October 16, 2016 and multibeam pole installation was finished upon entering deeper waters. We then attempted an EK60 calibration near the Skyway Bridge but were unable to complete it due to a strong tide and degrading weather conditions. Once past the Skyway, a GAMS calibration was completed.

Aside from brief C-BASS communication problems, in total, 56 hours and 25 minutes of video were recorded over 382 km of planned transects. The Reson SeaBat 7125 multibeam echosounder (MBES), EK60 echosounder and C-BASS were successfully used in tandem for a second time, which expanded the coexisting datasets. There was 24 hour C-BASS operations for almost the entirety of the cruise, with the MBES stepping in when the C-BASS had operational downtime.

Anecdotal observations of the data indicate a lower fish abundance and extent of living benthic habitat than in previous surveys completed in the same areas. Chlorophyll and turbidity were higher than February and April resulting in somewhat poor visibility.

At the end of the cruise another EK-60 calibration was attempted but a strong current/tide was still present and again the calibration was unable to be completed. The ship returned to port on October 22, 2016.