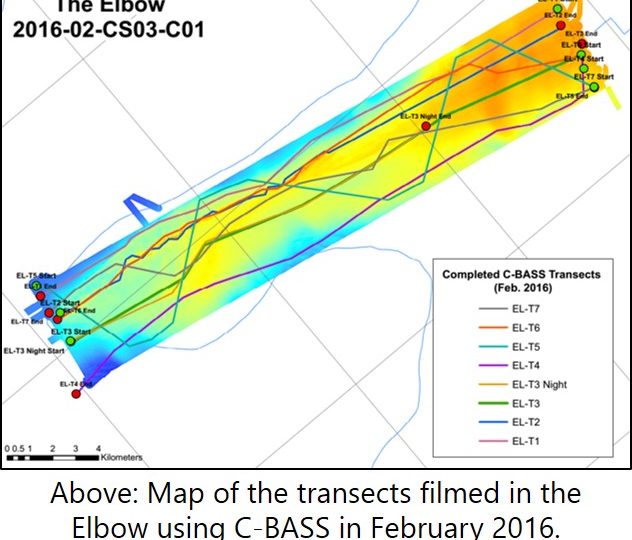 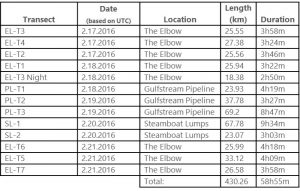 We filmed three different areas during a six-day cruise in mid-February which resulted in almost 59 hours of video covering 430 km of transects (see table at right). Luckily, weather only really gave us some difficulty during one of the days we were out but for the most part, operating conditions were 2-4′ seas. 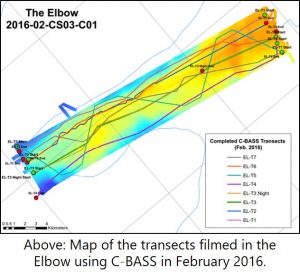 The first two days were spent in the Elbow before some weather set in we had to go further inshore to continue operations. This led us to surveying the Gulfstream Pipeline for a day; we ended up following the pipeline from approximately the 30-meter isobath to the 70-meter isobath for a total of 120 km worth of video along this feature. After completing the pipeline tows, we then moved on to Steamboat Lumps where we spent the day imaging Red Grouper holes. By this time, the sea state offshore had calmed back down which allowed us to return to the Elbow to finish our planned transects there.

Below is example C-BASS imagery from the Elbow (top) and Gulfstream Pipeline (bottom). In the Elbow imagery shown (left to right), are a Southern Stingray, Goliath Grouper, and several Bar Jacks. For the Gulfstream Pipeline imagery (left to right), what is being seen is an area of particularly high activity (with Vermilion Snapper, juvenile Hogfish, & Red Snapper, among others), when the C-BASS was navigated over one of the valve cages which had large spike in fish abundance and diversity, and lastly a large Goliath Grouper near the pipeline.