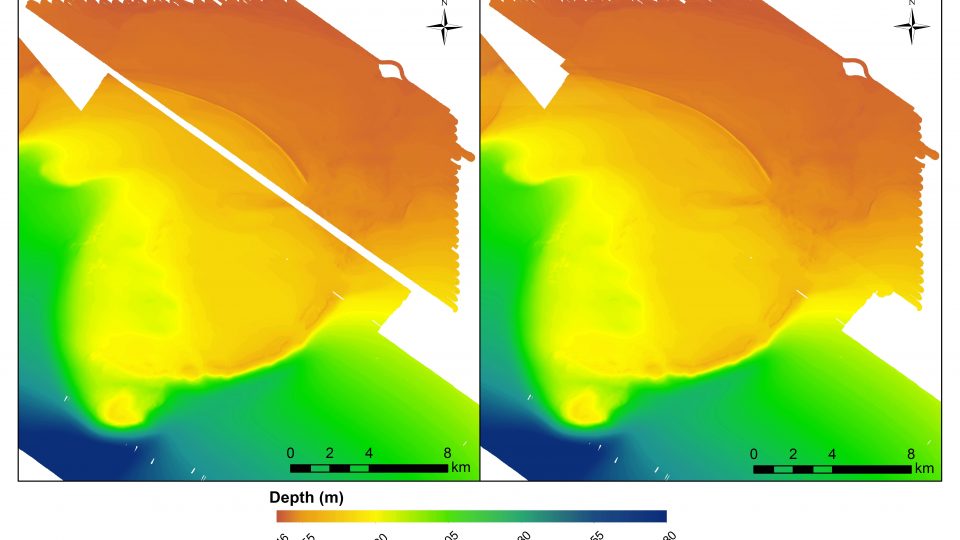 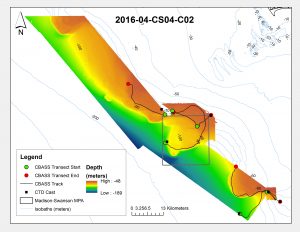 The C-BASS was used to image new areas around Madison-Swanson and also further the effort of having a long time series of transects in the MPA itself with the reef and ledge areas.  In total 19h13m hours of video were collected along 158 km of transects. Multibeam bathymetry data were collected to fill in gaps not covered by the previous mapping efforts of USF and USGS. This resulted in a complete high-resolution bathymetric map of the Madison-Swanson MPA. Additionally, several promising areas were identified for future mapping and video assessment efforts. These areas were identified via prospecting lines performed during transit to and from the primary survey region at Madison-Swanson.

Partially successful ping synchronization between the Seabat 7125 and EK-60 echosounders was also achieved during this cruise. The POS MV attitude data (pitch, roll and heave) were integrated into the EK-60 to improve the quality of the data. A successful calibration of the EK-60 was completed in Tampa Bay while the R/V Weatherbird II was anchored in approximately 8 meters (m) of water. 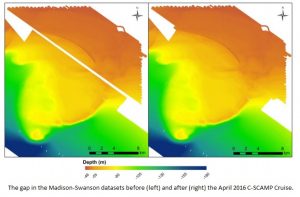 In summary, C-BASS data collection was less than anticipated due to a technical issue beyond in-situ repairs, but of no long term consequence to the project. However, the use of the multibeam system went far beyond what was anticipated and provided valuable benefit to the research community by completing a section within the Madison-Swanson MPA where there has existed a mapping gap for several years. This cruise also marked the first calibration of the EK-60 performed exclusively without external guidance, with members of C-SCAMP and FIO collaborating for the operation, which demonstrated that regular calibrations can be accomplished by the team.