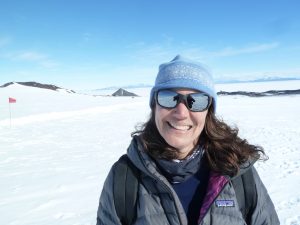 Heather Broadbent came to the University of South Florida’s College of Marine Science as a research scientist in 2000 where she developed PCB/MEMS oceanographic sensors. She received her M.S. in 2005 and then her Ph.D. in 2012 for her work on a miniature CTD Biotag for animal-borne measurements.

After graduating, she has worked on several CMS projects including SCINI Penguin (McMurdo Station, Antarctica), C-IMAGE and now C-SCAMP.

Currently her research is focused on using C-BASS to investigate the spatiotemporal distribution and marine habitat use of endangered/ threatened sea turtle species in the Gulf of Mexico.